10 Ways to Avoid the Dreaded Spitback

Not many things can totally ruin an otherwise enjoyable vape like spitback. One minute, you’re happily puffing out clouds of strawberry-scented vapor and the next you’re approaching your mouthpiece like it’s about to bite you. It’s no surprise that having a hot droplet of vapor spit up from the coil into your mouth isn’t pleasant, but if it happens a lot, it can make a tank or atomizer completely unusable.

The good news is that vapers can stop spitback pretty easily, and even if you can’t, there are ways to work around it.

What is spitback and what causes it? 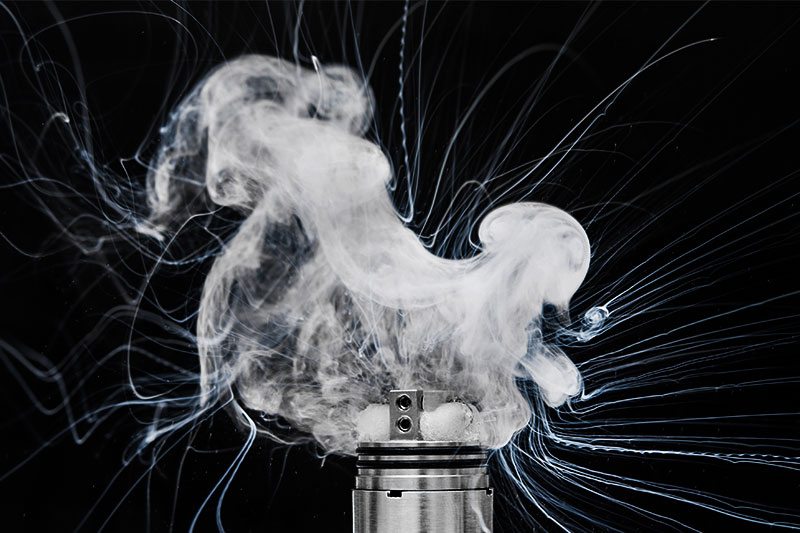 Spitback is the name for the occasional super-hot droplets of e-liquid that shoot up at you when you’re vaping. If you watch an RDA coil firing, you can sometimes see this happening, usually accompanied by popping sounds. The droplets spit in all directions, but if you’re unlucky when you’re vaping, one will shoot up into the mouthpiece.

Spitback has a simple cause: e-liquid gets pooled up on the coil itself and gets “cooked” instead of being vaporized. This bubbles and spits in the same way a pot of boiling water does, and with you inhaling from the tip, you can easily suck up a droplet or two. The problem is closely linked to flooded coils, but in some cases it can happen even without flooding.

10 ways to get rid of spitback

Vapers have devised a lot of different ways to prevent or at least reduce spitback over the years. It’s worth trying a few different approaches, but every one of them can help to control spitback, depending on the cause. You might not be able to completely stop it, though, especially if you’re using complicated coils.

1. Turn up the power 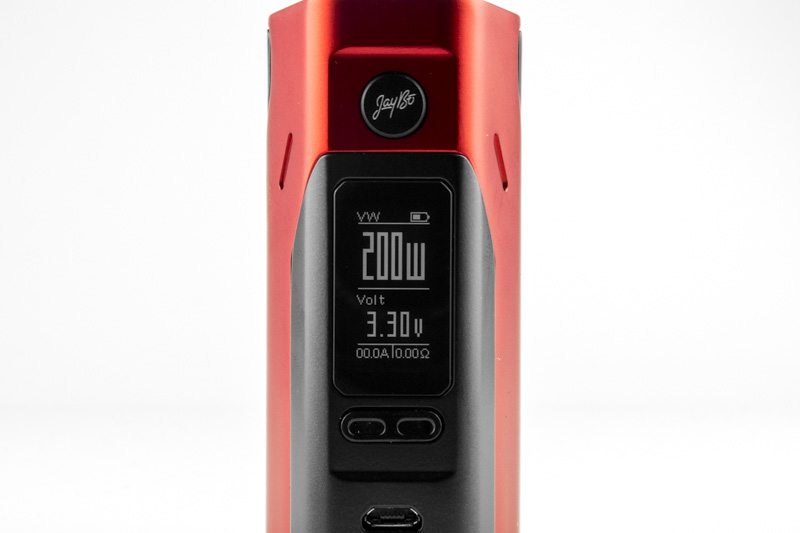 If your wattage is too low, you might not be vaporizing e-liquid as quickly as your wick is supplying it. Try increasing your wattage by 5 to 10 W if you have a variable wattage mod. 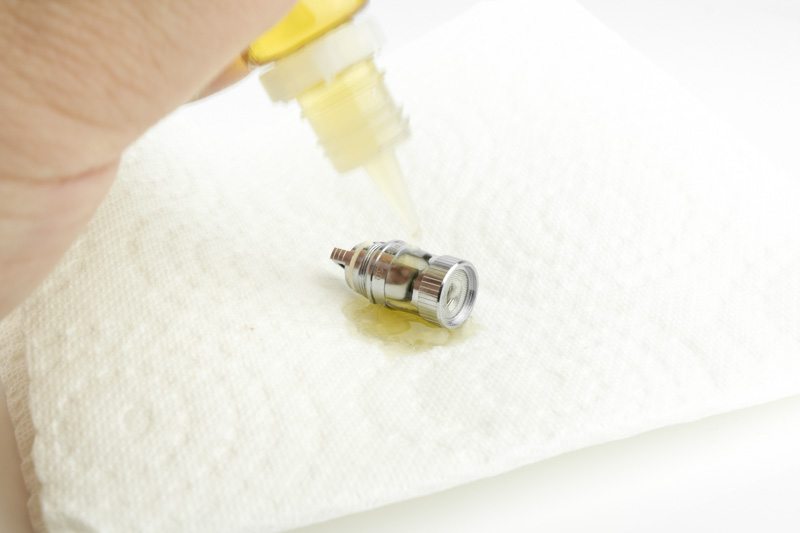 “Priming” your coil is manually dripping e-juice onto the wicks before you first use a coil. If you put too much e-juice in the chamber, you can easily cause flooding issues and spitback. Similarly, if you’re using an RDA and you drip too much, you can also end up with spitback.

The solution is simple: don’t overdo your priming or dripping. You should thoroughly soak the wicks, but not so much that the juice starts to pool on your coils. It might take a few attempts until you get a feel for how much you can add to the wick without causing issues, but if you look closely at the wick you can see when it’s getting saturated. 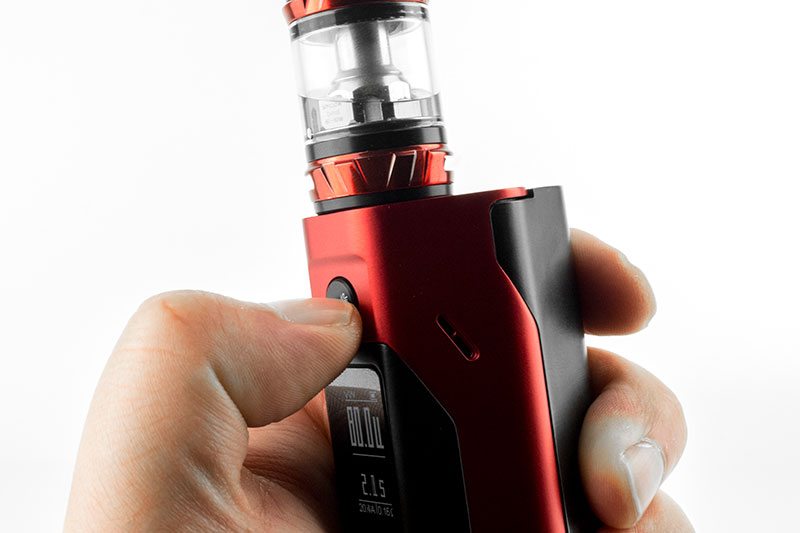 For a simpler solution – especially if you’ve primed or dripped too much – just hit the fire button for a couple of seconds before you start to inhale. The popping sounds should fade, leaving the ordinary, white noise-like hum of vaporization. At this point, you can puff away without fear of spitback. 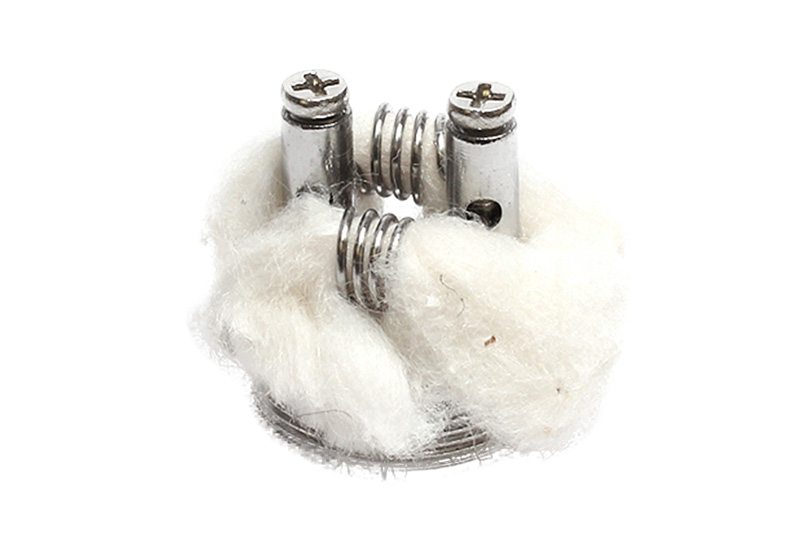 If you’re getting spitback and you’re using a rebuildable tank atomizer (RTA), your wick might be the problem. Unlike with sub ohm tanks and dripping atomizers, your wicks sometimes work too well with RTAs. If you don’t block the gap between the coils and the tank with enough wick, too much juice makes its way into the chamber and you get flooding and spitback.

So if spitback is a regular problem for you and you’re using an RTA, you may need to re-wick your coils. It might take some trial and error, but the aim is to cover the channels leading from the tank to the chamber without completely blocking them with densely-packed wick. If you’re having issues with flooding and spitting, you’ll need to use more wick than you usually do, but not so much that you have trouble inserting it through the coil.

5. Soak up e-juice from your tank’s chimney 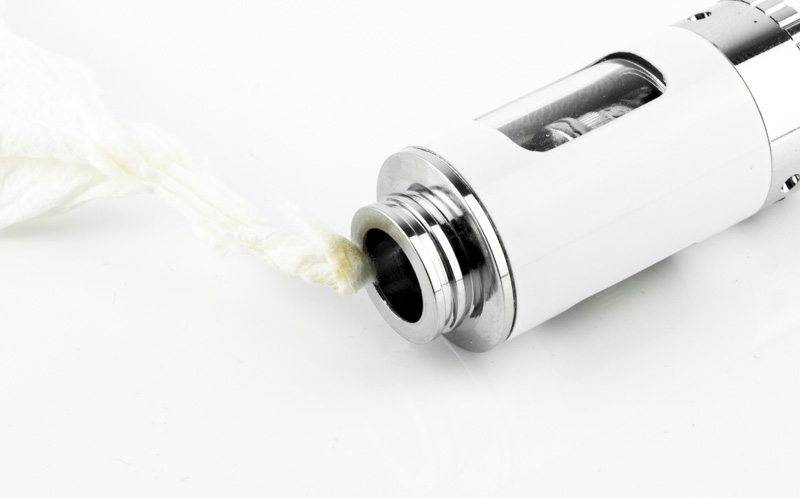 Although flooding is the most common cause of spitback, the problem can also be made worse by e-juice collecting in the chimney and finding its way back down to your coil. This can be fixed easily: get some rolled up tissue paper, remove your drip tip and insert it down into the chimney of your tank. This soaks up the excess e-liquid and reduces the chance of spitback. 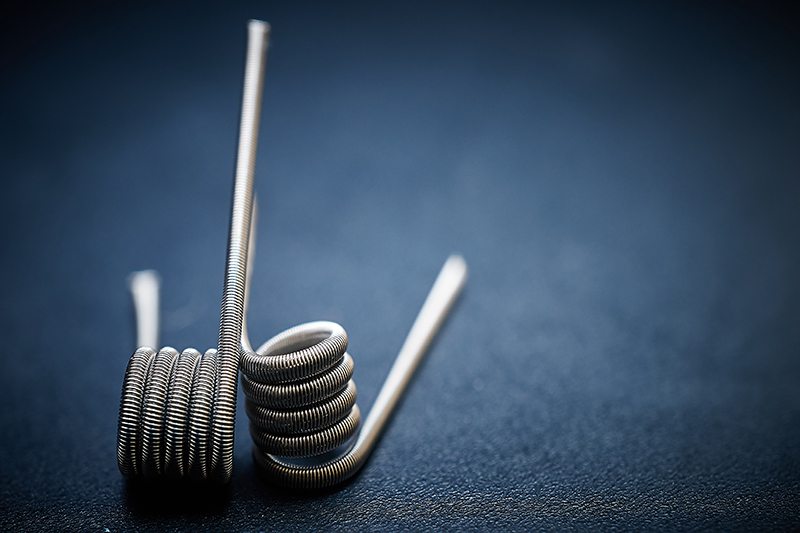 Multi-strand coil types often pop and spit due to their design. Twisted coils in particular have a bad reputation for this, but Clapton coils have the same issue. Their design makes it easier for e-liquid to pool on the coil, and so sometimes it’s hard to entirely avoid spitback on these coil types. The easiest advice if you absolutely want to avoid spitback is using a simpler coil instead. 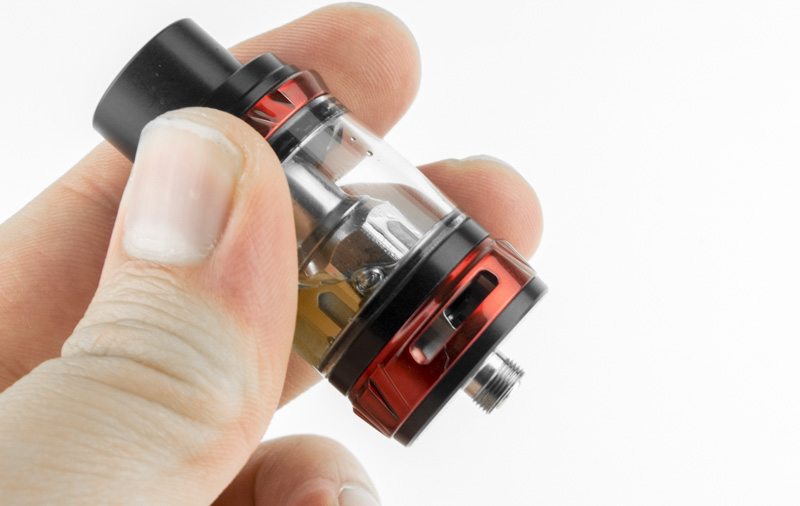 Inhaling too forcefully when you vape encourages flooding by literally pulling more e-juice into the chamber. This is easy to solve: inhale more softly, letting the coil and wicking do the work for you. If you’re still having issues, try reducing your airflow setting by turning the airflow adjustment ring usually found around the base of the tank. However, if you reduce the airflow, be careful not to inhale more strongly to compensate – this could just make the issue worse.

8. Switch to a higher-VG e-juice 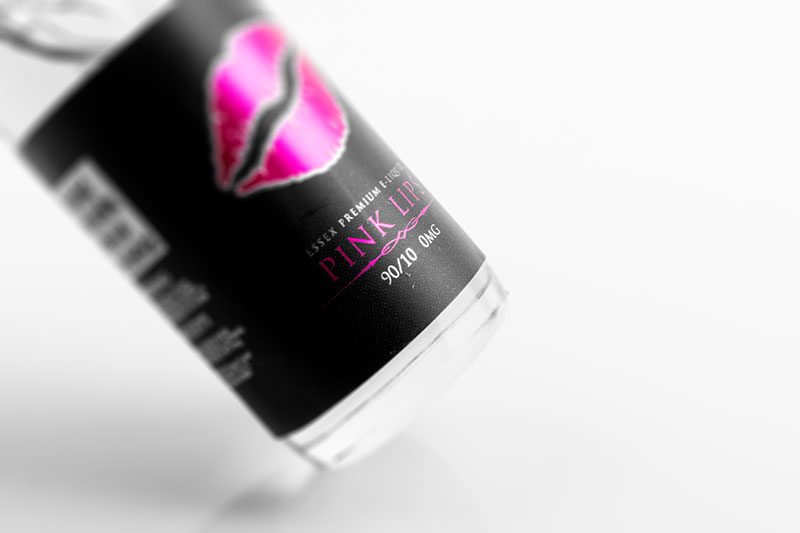 PG is thinner in consistency than VG, and this means that high-PG e-juices are more likely to flood an atomizer than high-VG ones. If you’re having spitback issues, changing to a higher-VG e-juice can solve the problem by slowing down your wicking. 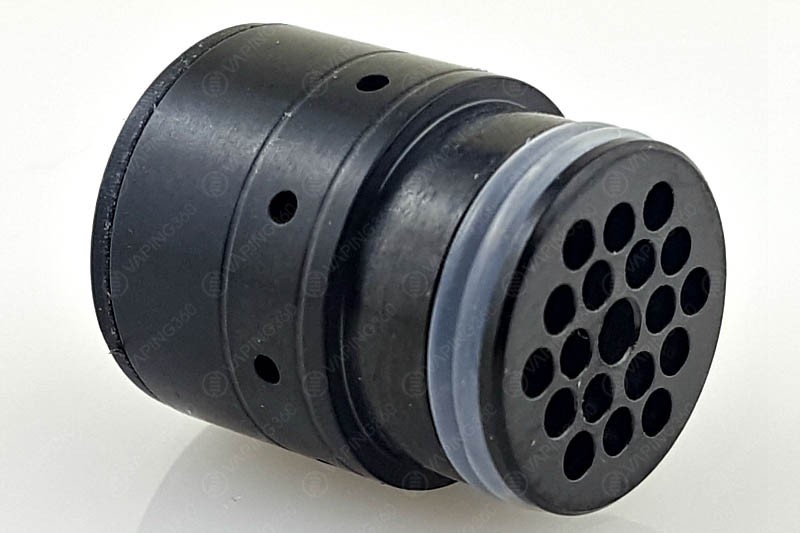 If everything else fails, there is still a pretty foolproof step you can take to avoid spitback: cover your drip so juice can’t possibly spit back up there. You could cover the tip with a paper towel for a low-tech solution, but many vapers cut down pipe screens so they fit into the drip tip. Using either approach, this can physically prevent spitback from reaching your mouth. Many tank and atomizer manufacturers are now incorporating anti-spitback measures like this into their designs because they’re one of the simplest and most reliable solutions to the issue. 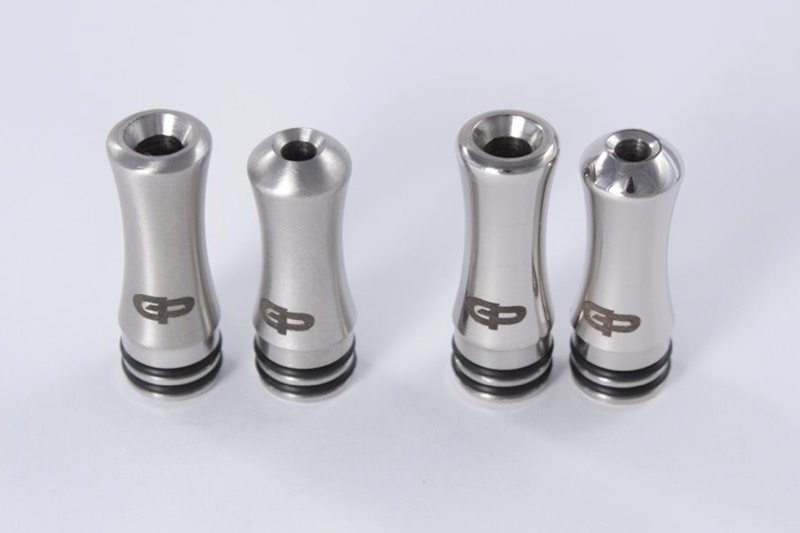 If you have a 510 drip tip, an alternative to covering your drip tip is getting a drip tip specifically designed to prevent spitback. Angled drip tips make it harder for e-juice to spit all the way up into your mouth. In particular, drip tips with a spherical, ball-and-socket like joint (called “rotatable” drip tips) allow you to put the tip at any angle and will prevent spitback (though too much spitback can pool on the inside). Longer drip tips – especially if they’re curved or have a bend in them – solve the issue in the same way.

You could also try to give yourself distance from the spit. Use a longer tip, something like the Cherryvapes Universal Friction Fit tip. This tip allows you to elongate the airflow path, thus getting further away from the possibility of hot pops reaching your mouth. These tips can really come in handy.

If you’re consistently having problems with spitback, the important thing to remember is that you can fix it. Even if the first eight suggestions don’t work, the last two certainly will. You might not be too happy about having to cut down a pipe screen or buy a new drip tip just to solve the issue, but the good news is that manufacturers are waking up to the problem. As anti-spitback measures become more common, we may be entering the post-spitback age of vaping. And – speaking as someone who’s given up on spitback-prone tanks in the past – that time can’t come soon enough.

The post 10 Ways to Avoid the Dreaded Spitback appeared first on Vaping360.