13 Popular Vape Tricks and How to Do Them

Home » Blog » 13 Popular Vape Tricks and How to Do Them

It’s not just about meticulously coiling wire and complex equations involving ohms and voltage – vaping can be simple fun too.

Basic smoke tricks such as blowing smoke rings have been around in the tobacco smoking community for decades, but vaping aficionados have taken this a step further, coming up with a variety of breathtaking new tricks and even setting up global competitions to showcase their skills.

Here we explain how to perform some of the most popular vaping tricks. There’s something for everyone, whether you’re a complete beginner or seasoned vaping trickster. For best results, use high VG juice in a sub ohm tank or RDA in a room with minimal airflow (no air conditioning).

How to do the ghost hit

What Is It – Also known as the snap inhale or mushroom cloud, this is one of the easier vaping tricks. It involves releasing a ball of vapor, then ‘snapping’ it back in.

How To Do It – Take a long drag of vapor and let it linger in your mouth for a couple of seconds. Then push out all the vapor from your mouth in a ball and quickly inhale it back in.

How to do the dragon

What Is It – Another easy vape trick to master, the Dragon makes you look like a ferocious mythical beast. Or maybe just someone blowing clouds out of four holes in their face. Either way it looks impressive.

How To Do It – Take a long drag without inhaling. Once your mouth is full of thick vapor, exhale forcefully through your nose while simultaneously exhaling through each side of your mouth. Master this and a guest spot in Game Of Thrones is surely yours.

How to do the waterfall

What Is It – Continuing the otherworldly theme, if you’ve ever wanted to look like a sorcerer dabbling with magic potion this is the one for you. It turns your vape into a heavy, almost viscous substance.

How To Do It – You’ll need a bottle with some frozen water in the bottom. Slowly blow your vapor into it, then pour it out. The vapor falls out like a slow waterfall.

How to make a vapor bubble

What Is It – Another piece of prop-based wizardry, this produces a huge bubble with vapor trapped inside.

How To Do It – Cut the bottom off a small plastic bottle and mix up a bowl of bubble solution using hand soap and water. Dip the end of the bottle into the liquid, then slowly exhale vapor through the nozzle to create a magical vape-filled bubble. 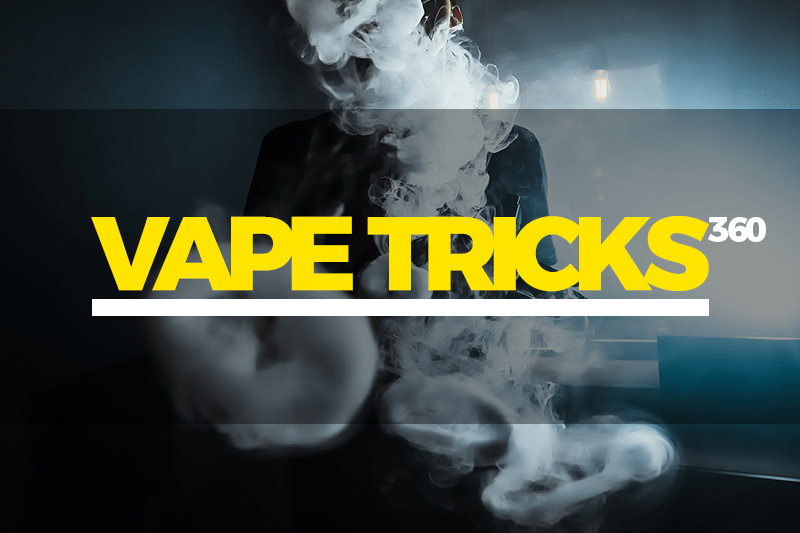 We recently launched our new Facebook page Vape Tricks 360. If you enjoy watching nicely done vape tricks, massive smoke rings and even bigger Jellyfish this Facebook page is probably your first step into tricking. We deliver new content every day to keep you up to date with the newest tricks and vape trick compilations from around the world.

How to do the Tornado

What Is It – This involves whipping a flat pool of vapor so it spins up into a tornado shape. Perfect for those DIY re-enactments of the Wizard Of Oz.

How To Do It – Carefully exhale vapor onto a flat surface. It needs to be as thick and still as possible. Then use your hand to chop at the surface and flick your wrist up and lift your arm, all in one swift movement. This converts the vapor into a tight twisting spiral.

How to do the French Inhale

What Is It – Also known as the Irish Waterfall, this was made famous in the classic Snoop Dogg and Wiz Khalifa video. Vapor flows up from the mouth to be inhaled through the nostrils, similar to a waterfall in reverse.

How To Do It – Take a drag but don’t inhale, let the vapor settle. Then slowly open your mouth, push your bottom jaw out and let the vapor come out naturally. Inhale through your nose at the same time. Voila!

How to blow O’s

What Is It – Based on the age-old smoke rings trick but revamped for vaping, they form the basis of many of the more ambitious tricks described in the ‘advanced’ section. They are relatively common, but perfection takes practice.

How To Do It – Take a pull on your vape and inhale it into your throat. Keep your tongue at the bottom of your mouth and towards the back of your throat. Form your lips into a round ‘O’ shape then push a small amount of vapor out using your throat in a short pulsing motion, similar to a subtle cough. The size of the O you make with your lips correlates to the vapor ring produced.

How to blow double and triple Vape Rings

What Is It – As the name suggests, this is blowing two, or even three, O rings at the same time.

How To Do It – Although it looks impressive, the technique is quite simple if you’ve mastered blowing Os. Simply place a finger over your mouth, pressing and pulling down slightly on the top lip to split the opening of your mouth into two sections. Now you get two Os for the price of one! Triple Os work on the same principle: use two fingers to split your exhale, but open your mouth wider for best results.

How to do the Bull Ring

What Is It – Use vapor to create a pain-free, non-permanent ring through your nose.

How To Do It – Blow a thick medium-sized O then lean in and use your nostrils to inhale the top part of the ring, creating the illusion of a bull ring through your nose. This is best practised in front of a mirror.

How to do the Vape Bend

What Is It – Demonstrate your mastery of the O ring with a vape bend. This is a way of manipulating the O to direct it wherever you wish.

How To Do It – Cup your hand next to your mouth and blow an O ring. Then follow the O with your hand, gently directing it where you want it to go. With practice you can start to spin the O and do more advanced versions such as the Infinite Bend and the Shark Bend.

How to do Jellyfish

What Is It – Also known as the Atomic Bomb and the Force Field, there are countless variations on this crowd-pleasing trick. The basic idea is to push a small O through the centre of a larger one so they combine to resemble a jellyfish or mushroom cloud. This is difficult to master so may require a lot of practice.

How To Do It – Blow a large single O ring then immediately place your hand behind it and push it slightly to make the O to slow down. Then push a smaller O through the centre, similar to first part of the Ghost Inhale. This second O pulls the first O ring around it, and leaves a trail that makes it resemble a jellyfish. As a final flourish, lean in and inhale the lot. Yum.

How to do Triangles

What Is It – Bored with O rings? Use hand movements to turn it into a triangle.

How To Do It – Blow a thick milky O ring then use your hand to push it, and tap down on the side of it twice in quick succession to bend it into a triangle. Sounds simple but timing is everything. If you’re quick, you can then perform the Jellyfish for bonus vaping points.

How to do the Bane Inhale

What Is It – Inspired by the legendary Batman villain, this is a tweak on the French Inhale trick so it simulates the mask worn by Bane in The Dark Knight Rises.

How To Do It – Follow the instructions for the French Inhale but connect your top row of teeth with your bottom lip to form gaps – this produces streams of vapor. Inhale fast through your nose for best results.

These are a selection of some of the most popular and impressive vaping tricks, but there are many variations, and new ones being invented all the time. Let us know your favourite in the comments below.

What Is It – Give your vapor an impressive flashing colors effect.

How To Do It – Please don’t add anything to your ejuice for this one! While technically not a trick, colored vapor is an impressive effect that you won’t need to practice for. The only thing you need for this one is a vape mod with some colorful LEDs such as the Sense Arrow. Just throw your favorite atomizer on top, turn the lights off, turn the music on (optional), activate the LEDs of the mod, and vape.

Here are some of the best vape trick compilations that we have found on the web. Once you are done practicing your favorite smoke tricks, watch these awesome videos for more inspiration.

The post 13 Popular Vape Tricks and How to Do Them appeared first on Vaping360.