Over the last five years, the technology for dry herb vaporizers has been rapidly advancing. Much like personal computers, the latest weed vapes are not only way smaller but way more powerful than ever before.

Note: You may hear us use the term cannabis, dry herb, weed, marijuana or loose leaf on this page. They are all referring to the same thing. You might choose to use these products for aromatherapy or with tobacco but let’s be honest, they were designed to vaporize cannabis.

This section is dedicated to the best portables available on the market today. The cannabis portable vaporizer market is rapidly evolving so these are the latest and greatest portables to date! 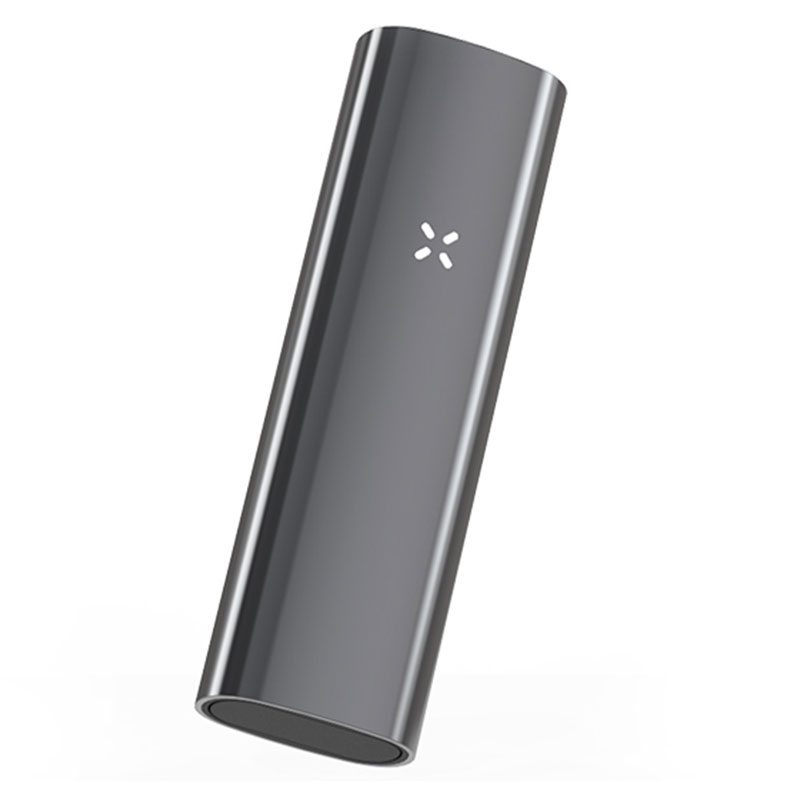 The PAX 2 quickly became the iPhone of portable vaporizers and now PAX Labs has a new and improved version called the PAX 3 which takes some of its best features to the next level. Increased airflow, faster heat-up times and a Bluetooth app that controls your temperature, the PAX, one of the best portable vaporizers to date just got that much better. 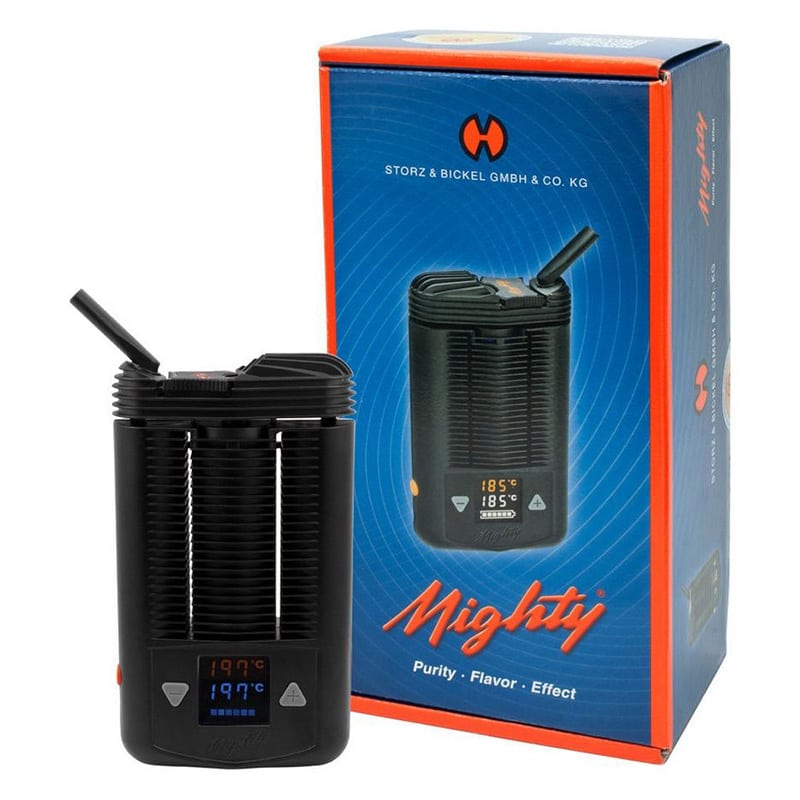 The Mighty has withstood the test of time. It has been around for years now and like the Volcano, the design still holds up. This is a vaporizer you can count on for years to come, as long as you take good care of it. It vaporizes dry herbs or concentrates with included pads. The design has been slightly improved over the years, so this Mighty is now mightier than ever.

The device utilizes both conduction and convection to create a steady flow of vapor. It has an intuitive dual-button interface for dialing in precise temperature settings. A built-in display makes it easy to see battery life and the current and target temperatures. It’s one of the most well thought out portable weed and dab vaporizers ever made. Not cheap, but well worth the money. 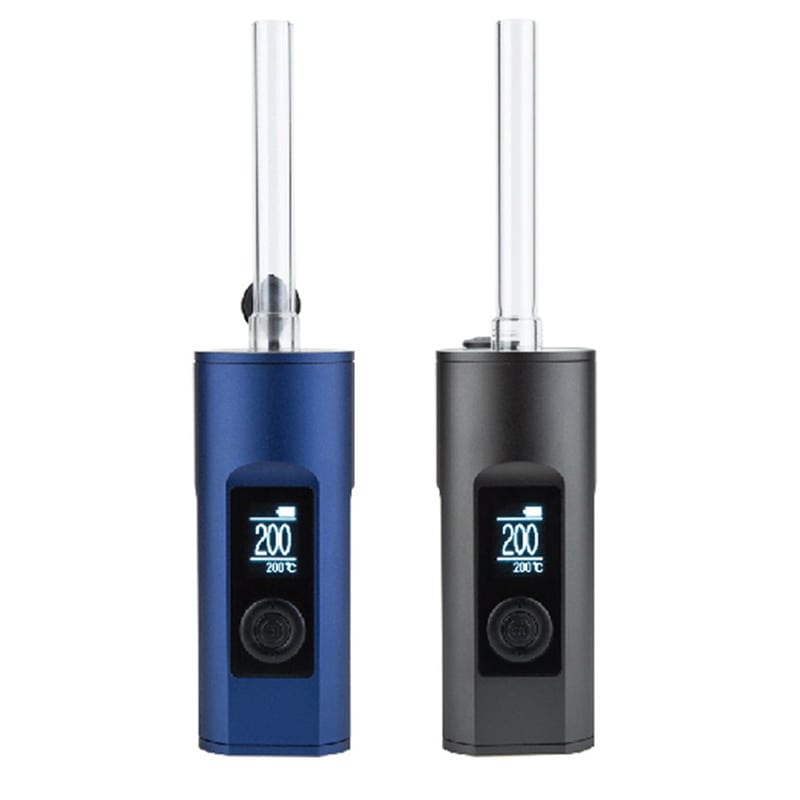 Arizer has gained a reputation for making dependable vaporizers. The Solo II was the long awaited update to the acclaimed Solo. The airflow has been slightly opened compared to the original, but still maintains a nice restrictive draw. It utilizes a removable herb chamber which comes in clutch for those stop and go situations. Its internal battery provides

The Solo II is slimmer than the classic Solo. Its ergonomic design feels great in the hand. It has a bright screen and a menu system for adjusting your settings and is constructed of quality materials. The Solo heats up fast and delivers great flavor due to an all glass vapor path. It also feels durable and is covered under a two-year warranty with Arizer. It’s time to go solo. 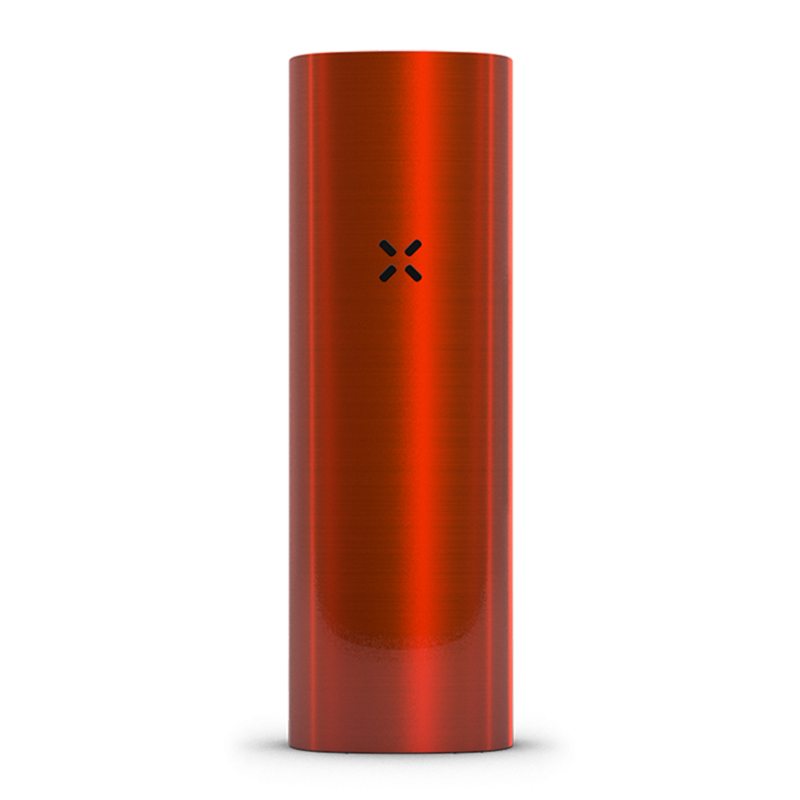 In short, the PAX 2 is the iPhone of portable weed vaporizers. When you first pick it up, it doesn’t make any sense. Its simple and understated design can actually be confusing at first. Once you figure it out, it is smooth sailing from there. It doesn’t just look cool, it actually works too.

The first PAX was known for its good flavor. This has been improved in the PAX 2. The battery life is also better, and the body is smaller and narrower. The PAX 1 or 2 is not going to give you big milky clouds but you will get great flavor and it is a discrete way of using cannabis.

The PAX 2 has a unique design that is based off the original PAX. It has a deeper oven that holds a decent amount of herb, and works best when it is fully packed. Cleaning and maintenance is minimal, but must be done often for the optimal vaporization of your herbs. 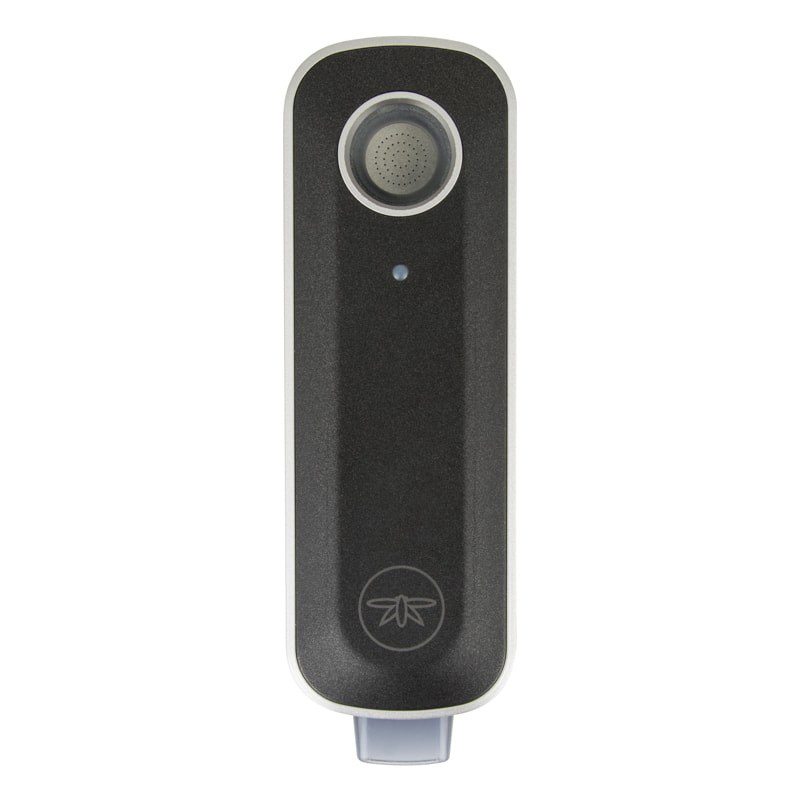 The Firefly 2 heats up when you press the button so there is never any vapor coming out of it, which greatly reduces the smell. This is a big consideration for people who are stealth vaping.

The Firefly took the portable vaping world by storm because it was drastically different from anything else on the market. Now the creators have come up with a new version that improves upon just about every critique the first one had. The Firefly 2 is very different from the rest of ‘em.

What makes the Firefly 2 so unique is the fact that it has on-demand heating. In other words, it is not an oven that will stay heating. The user presses a button which initiates the heating process, similar to the old Magic Flight Launch Box. Perfect for long, drawn-out sessions.

One of the benefits of this heating system is the fact that none of the flavor gets wasted. That has a positive effect on flavor. Its small size makes it great for on-the-go use, however the oven can only hold small amounts at a time. Last but not least, it is good at concealing odors. 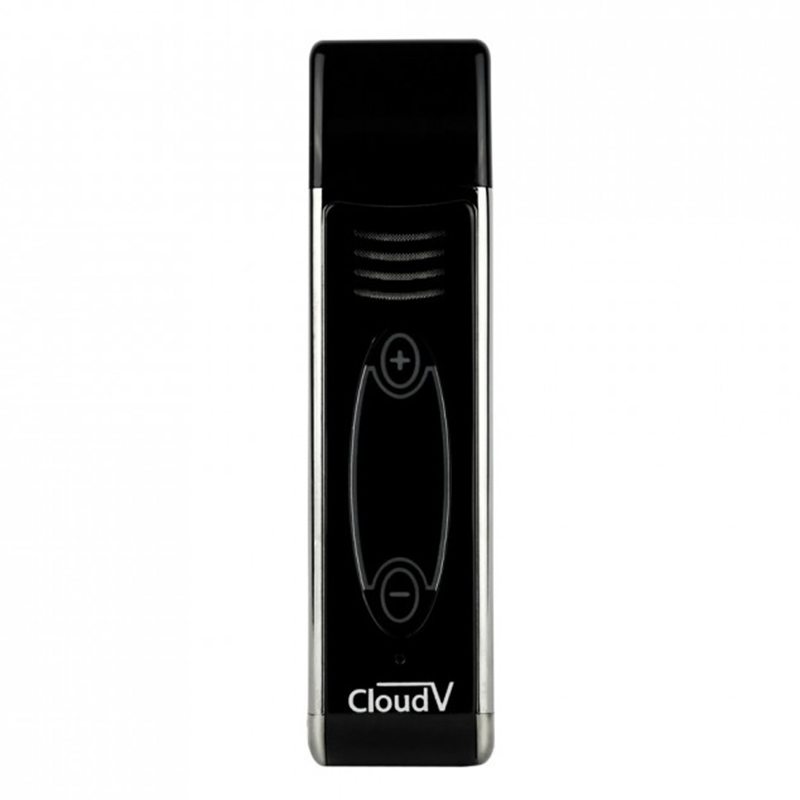 The Diamond features a decent-sized ceramic chamber with four holes that are built into the edges of the chamber which is reminiscent of the PAX oven. The mouthpiece is one solid piece of plastic without screens or filters, so it is actually very easy to clean and maintain.

The Cloud V Diamond is extremely portable and compact. It has a magnetic cover for the mouthpiece. Best of all, this thing heats up almost instantaneously. Within seconds of powering on, you will smell the aroma and even see vapor flowing out the mouthpiece.

The Diamond is dependable, efficient and just works the way it should, no matter how much you pack. The flavor is fantastic and the vapor production is abundant for a portable herb vape. 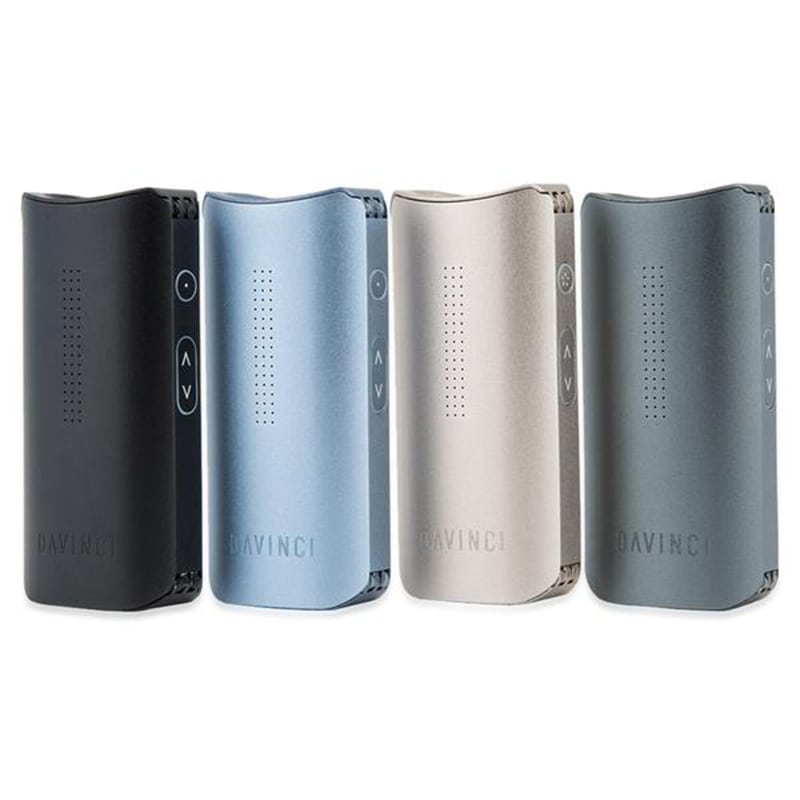 The Davinci IQ is not just impressive in size. Its also impressive in performance. The IQ allows you to dial in precise temperature control settings. It also has a 51-light grid display and simple to use interface. Suitable for anyone from beginner to advanced dry herb vapers on the run. The device is powered by replaceable 18650s, so you can swap them without ever missing a beat.

The vapor path is made entirely of ceramic zirconia. This material creates thicker clouds and allows heat to be distributed evenly across your herbs. It’s also one of the reasons for the IQ’s top-notch flavor. Choose from 4 different heat settings or use the Bluetooth App for full control. 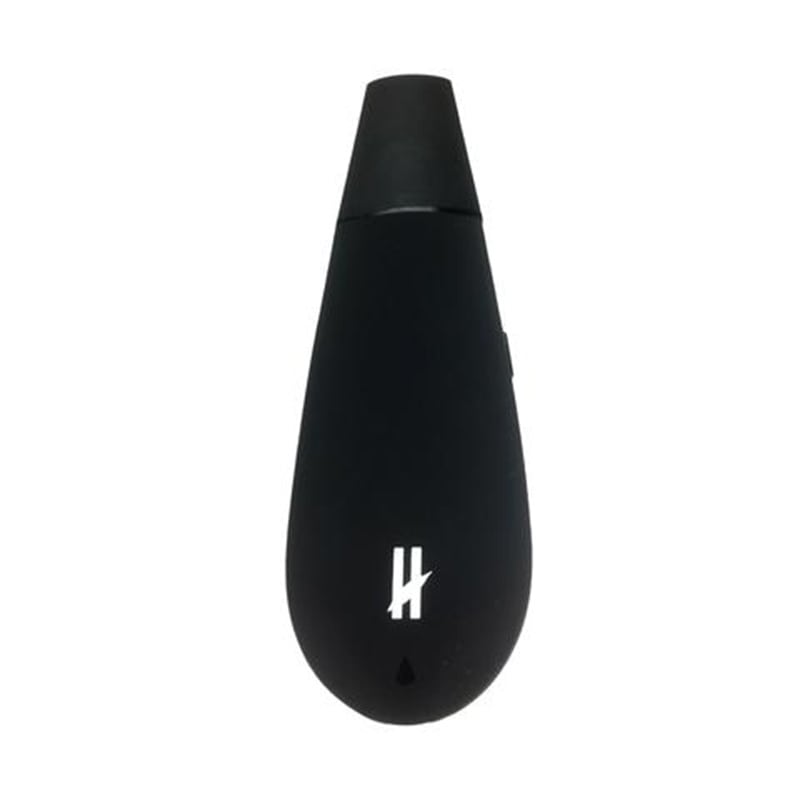 Easily one of the most affordable portables for dry herb right now. It really doesn’t get much more affordable than this. The Black Mamba is impressive for its size and price. It offers a glass vapor path and a ceramic chamber, features normally found on the more expensive vaporizers.

It has a unique flat shape that fits well in your pocket. The device is coated in a soft rubbery plastic for durability and added grip, similar to the Kandypens Feather and Micro G Pen. If you want to ditch the lighter and start vaping, but you’re low on funds, the Mamba is your best bet. 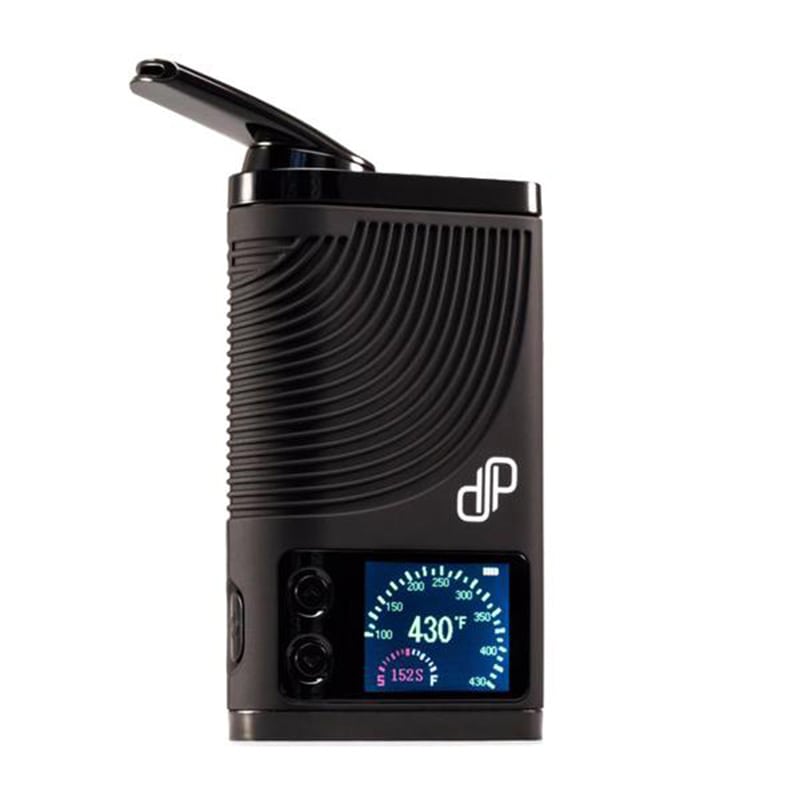 The Boundless CFX is a solid choice. Smaller than the Mighty, but larger than the Crafty. It also borrows a few design cues from both devices, while incorporating a few of its own. This portable vaporizer has a bright, colorful LED screen and does temp control with true precision. There’s also a concentrate pod suitable for vaping cannabis extracts.

When you look at the price, it doesn’t even make sense. The CFX has features normally found on more expensive vapes, that usually go for double the price of the Boundless CFX. For example it has quick heating and a 2500 mAh battery capacity good for up to ten sessions. Its ceramic and steel heating system utilizes a combination between convection and conduction.

These portable cannabis vaporizers have been around for awhile now but still are worth mentioning on this list. They include the Goboof Alfa, the HipVap and the Mighty/Crafty. We will be keeping our eyes out for future products so that we can keep this list up-to-date.

What is a dry herb vaporizer?

Let’s back up for a second. Just like personal computers, the original vaporizers were gigantic! Now we refer to these as “desktop units”, which still work great and have a purpose. However, in more recent years, marijuana vaporizers started getting smaller and more portable.
One of the first ultra-portable vaporizers to gain traction would have to be the original PAX. Unfortunately the $300 price tag discouraged a lot of people from switching over to vaping.

Since then, and even since I started working for Vaping360, I have noticed more portable weed vaporizers hitting the market for under $200! Another notable portable marijuana vaporizer is the Magic Flight Launch Box, which is still used by vapor connoisseurs on the regular, to this day.

PAX Labs has since released the PAX 2 portable vaporizer, an updated version of the original, in order to compete with this rapidly growing market. This market has become a lot more competitive since they started and basically cornered the market on portable loose leaf vaporizers.

You may have seen our Best Dry Herb Pens page. In that section we have specifically chosen those particular vaporizers that have the form factor of a vape pen. Although rare, this type of product has been in high demand probably long before the technology was available.

The main advantage to using a weed vape pen would be portability and discretion. However, although bigger in size, portable dry herb vaporizers usually have more advanced features such as an LED screen with battery-life indication. More importantly, you will usually get a more satisfying vape from a portable vaporizer versus a pen style. The choice is subjective.

Conduction means that there is a conductor of heat, for example a heated surface that makes contact with your weed. This heating process will probably give you a stronger hit, but will run the risk of getting close to combustion. Another advantage is that it will heat up faster.

Convection has to do with air. In this heating method, the dry herb material is heated by air, which takes longer to do, but will give off better flavor. Another advantage to this process is that you won’t need to stir your loose leaf around to ensure that it gets evenly vaporized.

Most portable vaporizers operate with a combination of both conduction and convection heating. For example, the weed might be touching a heated surface (Conduction), however when you inhale, the air that is pulled inside is then heated thus increasing vaporization (Convection).