The Aegis Legend is the newest mod from Geekvape. It’s a follow up to their original Aegis, a single-26650 battery mod that gained popularity from being water resistant and extremely durable. The Aegis Legend however, is a dual-18650 device that maintains the same durable, water-resistant design with a sexy leather inlay and rubberized exterior.

Note: All color options are mostly black with variations on the frame and leather portion. 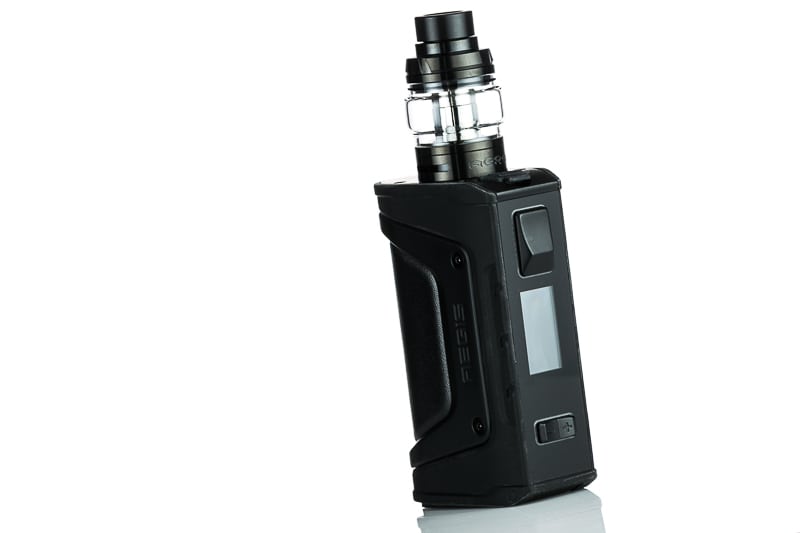 When I first got this mod, it was pretty much just what I had expected. It looks like a dual-battery version of the original Aegis mod. Not very big or bulky, but still bigger than most dual-18650 mods — not by much though. It has an external rubber coating and nice leather backing, like the original Aegis, that feels good in the hand and isn’t cheap. The mod is not that heavy either — lighter than you would expect.

The big change to this one, besides the battery configuration and wattage limit, is the battery door. The original Aegis had a big threaded cap, but the new Aegis Legend uses a standard bottom-fed battery tray with a locking door. Overall, I was pretty impressed with it from the start. 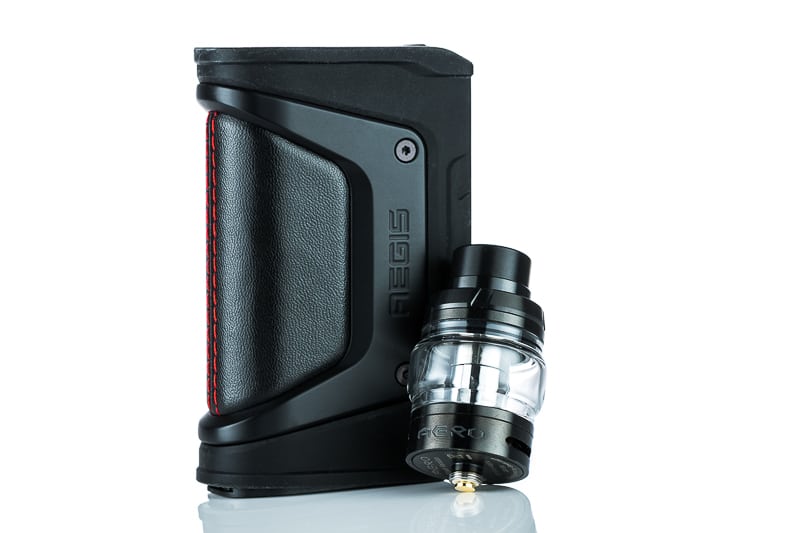 The Geekvape Aegis Legend has a rounded rectangular design with a front-facing screen and fire button. Similar to the popular Lost Vape Therion or Paranormal mods. This thing is built like a tank, but I’ll go over durability a little later in the review. It feels solid with no button rattle. It has a bottom latch battery door that fits well and is easy to open but a little hard to close with batteries inside. All in all, it is a well built and good-looking mod.

The Geekvape Aegis Legend is full of features as well. Pretty much everything you would expect from a modern-day mod. Wattage mode, TC for SS, Ti, and Ni200 wire as well as TCR mode. It also features a wattage curve with five increments and a bypass mode. The screen is colored but with only three color options (red, light blue, and blue.) A few more options would have been nice, but a color screen is better than no color at all. 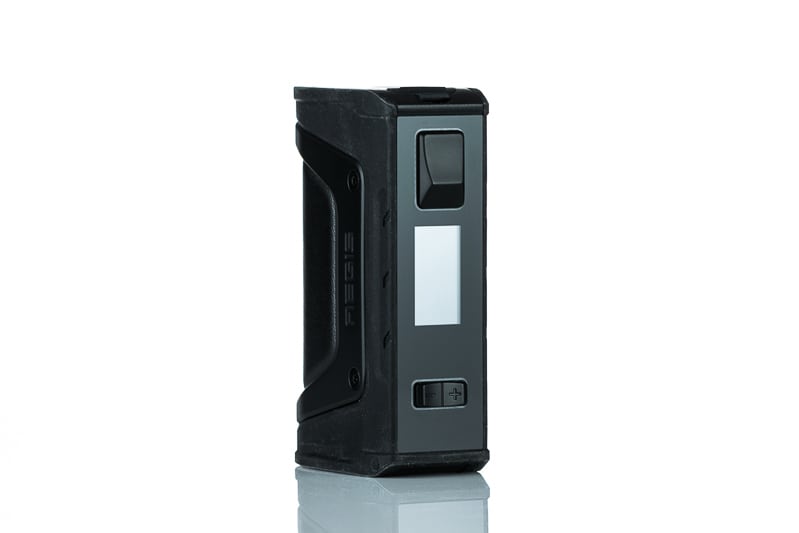 Using the mod is pretty simple. It’s five clicks to turn on or off. Three clicks highlight the modes and allow you to scroll back and forth between them. While in this screen, you can hold plus and minus to cycle through the available screen color options.

When you reach your selected mode, hold fire to accept or click it to cycle through the other options. After your mode is highlighted, you can use plus and minus to adjust. When you are done, hold fire to exit. That’s how you adjust things like the power curve mode settings and your power in temp mode and your TCR in TCR mode.

Changing the temperature in temp mode, or the power in power mode, can be done at any time by pressing plus or minus when you’re not in the mode settings. 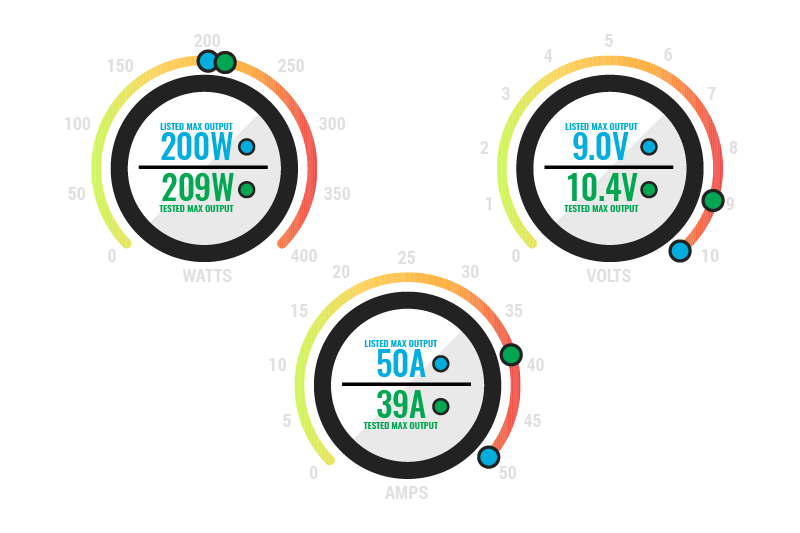 Testing on this mod was done with Sony VTC5A Batteries. They list the specs at 200 watts, 9 volts, and 50 amps so kudos to them for listing all three. During my testing the max wattage achieved was 209 watts, So it is accurately rated and capable of doing a little more than the 200 listed. 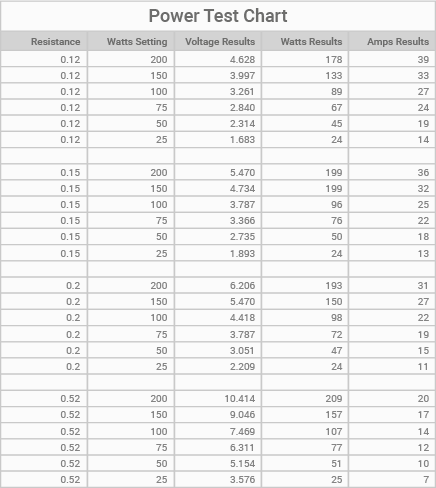 The mod also adjusts in 1-watt increments at 100 or more, but 0.1 increments below 100. During my testing, the mod never got warm at all. It’s also a pretty accurate mod as well. It hit a little weak with the 0.12 ohm resistance like most mods, but with the 0.15 and higher it was usually within 3 watts. It does hit a little higher with higher ohm coils over 100 watts. The Aegis Legend is an accurately-rated device with great power mode performance. Full test results above. 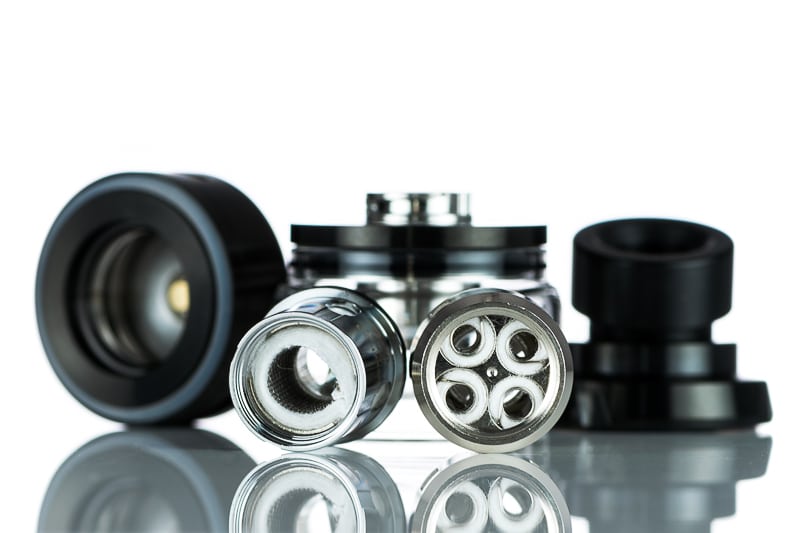 Even though there isn’t a wattage limit on TC mode (you can set it to the full 200 watts) it realistically only puts out about 40 watts, so it isn’t usable with bigger builds at all. It can’t heat them up.

With the smaller builds it could heat up the vape, but was still not very good. It cuts back way too hard when it reaches temp and doesn’t provide a smooth consistent vape the way temp control should. All things considered, the Legend is a fail in my book when it comes to TC. 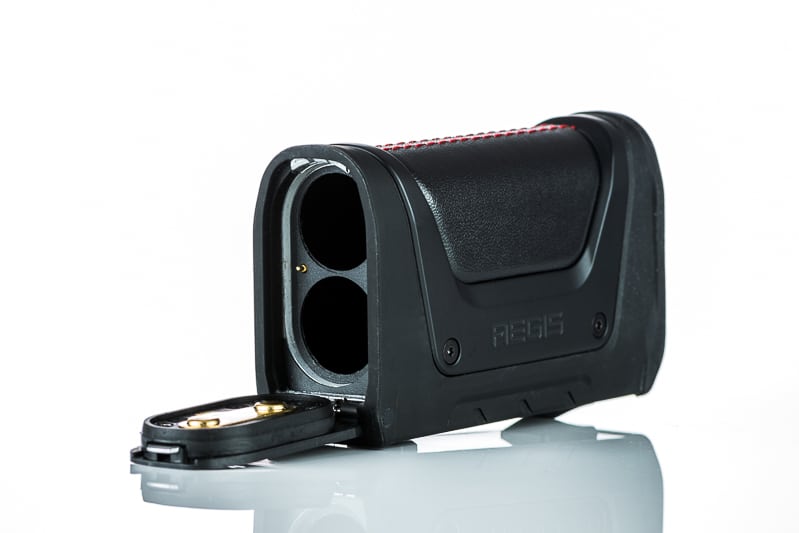 I had to push this one to its limits. Much like the original Aegis, Geekvape is claiming the Legend to be a rugged IP67 waterproof mod. They do list some caveats though. IP67 means it is dustproof and can be underwater for 30 mins at a depth of 1 meter (a bit over three feet). They also state that although its shockproof, if you drop it from a height greater than one meter, it can damage the batteries in the mod and compromise it’s waterproof seal.

To start my stress testing, I decided to check the water resistance first, in case it would stop working after taking a beating. I started by leaving it on with batteries in it for 10 mins at a depth of 1 meter deep in my hot tub at 104F. I figured the stress of the heat might kill it, but I took it out and it still worked fine with no issues. So, I wiped it down and went on to the drop test.

For the final test, I threw it up in the air around four meters high and gave it some spin so it could fall randomly. The top left corner of the mod landed onto the concrete. It put a dent in the metal frame, cracked the screen, and broke the fire button off. However, it still worked fine.

Note: Drop tests were not done with batteries in the mod as they say the mod can damage them if dropped from too high.

I’d easily give The Legend a pass for durability. It survived a drop twice as big as they list with no major damage. It also worked after a drop that would be unlikely to happen under regular usage, albeit not looking good afterwards. It even survived ten minutes submerged in 104° F water. I’m very happy with these stress test results — it’s durable.

If you aren’t a temp control vaper and want a powerful mod that can take a serious beating, it doesn’t get much better than the Geekvape Aegis Legend. It has potential to be one of the best box mods of 2018. Let me know what you think about it in the comment section.

Buy Now
Check Out Our List of Best Box Mods