Innokin is most famous for their smaller internal battery mods. But their newest mod called the Proton is a dual-18650 mod listed at 235 watts. It has a big color screen, a joystick control with a firing bar and a compact form factor, especially for a dual-battery device.

The Proton is sold separately or as a kit with the Innokin Scion II Tank. It is available in three color options, black, silver, and rainbow, but there’s not much variation going on between these designs, besides the slightly different color accents.

When I first got this mod, I was pretty impressed with the size of it. It’s one of the smaller dual battery mods I’ve come across. The screen is bright and colorful and you can also adjust the colors. It’s not a full-color screen like the SX Mini G Class, but more like the Sigelei Fuchai 213 Plus with color text and outlines.

The screen is really large too. At 1.45 inches, it’s the largest screen I’ve seen on a mod to date (the Smoant Cylon and SX Mini G Class have 1.3-inch screens.)

Speaking of the G Class, I also found the joystick on the Proton works well and is really easy to use. I didn’t need to read the manual to figure out how to use it. The menu system is really well laid out, and the joystick makes it easy to navigate. I’m already very impressed. 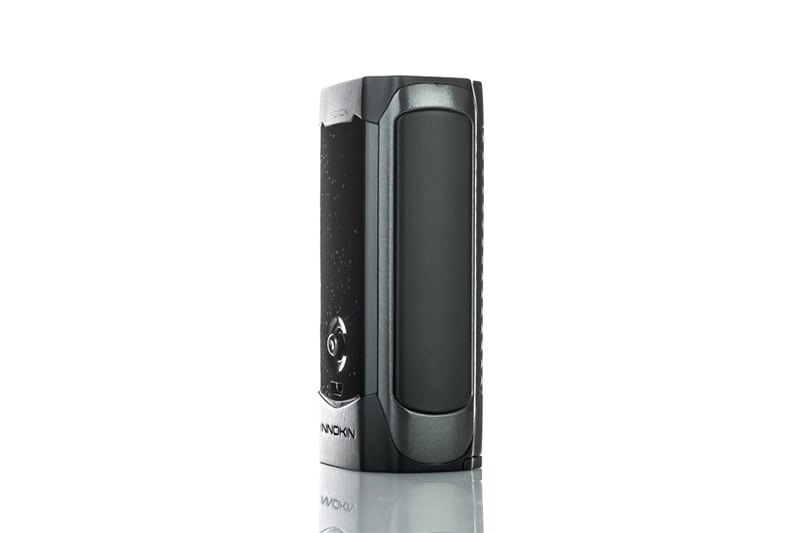 The Innokin Proton mod has a symmetrical design with a fire bar on one side, and a front-facing screen. The overall design reminds me of the popular Smok Alien and Wismec Predator mods of yesteryear but, thankfully, this one is built much better.

The Proton is solid overall with no button rattle, but there is some minor play in the fire bar (you can wiggle it back and forth slightly.) I have already relayed that information back to Innokin, so hopefully they can fix it. Not a big deal but worth mentioning.

Note: None of my friends who own one reported any play in the fire bar, so it could just be an isolated issue. But I can only review what’s in my hand. Outside of that, everything else was on point.

The mod has a solid black body. The color options are just accent panels around the fire bar and the other side of the mod to make it symmetrical. I would have liked to see color options for the body itself. There is a textured plastic plate on the back of it for grip and accent strips on the top and bottom of it. It feels nice and compact. Overall, a well built and good looking mod. 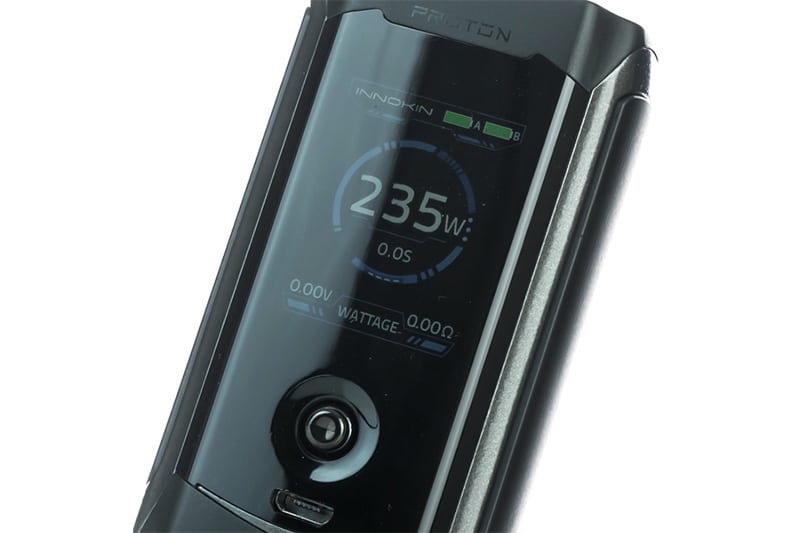 The Innokin Proton is packed to the brim with features. Pretty much everything you would expect from a good modern day mod. Wattage mode, TC for SS316L, Ti, and Ni200 as well as TCR mode and a bypass mode. It also features a wattage curve mode with twelve increments (0.5-second increments for a total of six seconds) and four memories for the curves. There really isn’t anything missing from this mod in terms of functionality.

Using the menu, you can: 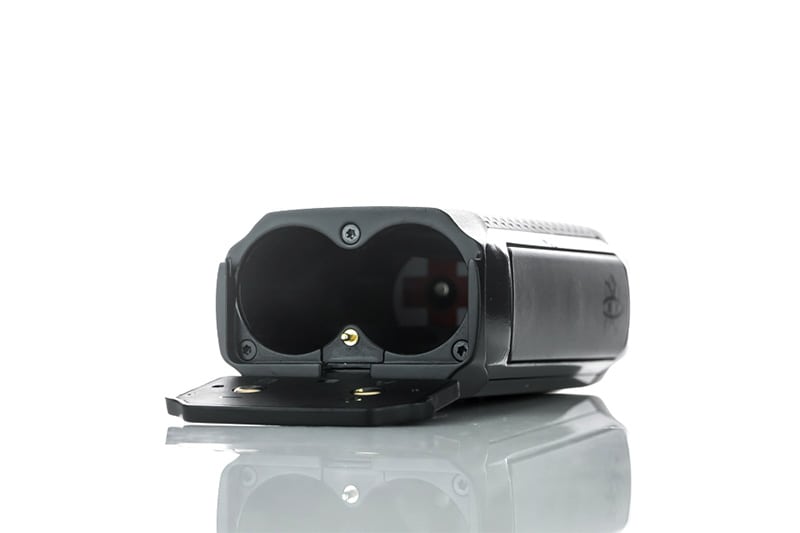 Using the Proton is pretty simple. It’s three clicks to turn on or off with the fire bar. Three clicks of the joystick to enter the menu system. To change modes, use the joystick to scroll and click to accept. Very easy and intuitive.

To adjust your power or temperature, hold the joystick in any direction until either the power or temperature blinks. Then use up and down to adjust and click to select. When attaching a new atomizer, the mod will ask if it’s the same one and give you the option to select a different mode.

There are also quite a few shortcuts and Innokin includes a large and easy to read quick reference guide. Right and fire together locks or unlocks the mod. Left and fire will read individual battery voltages and show the puff counter. 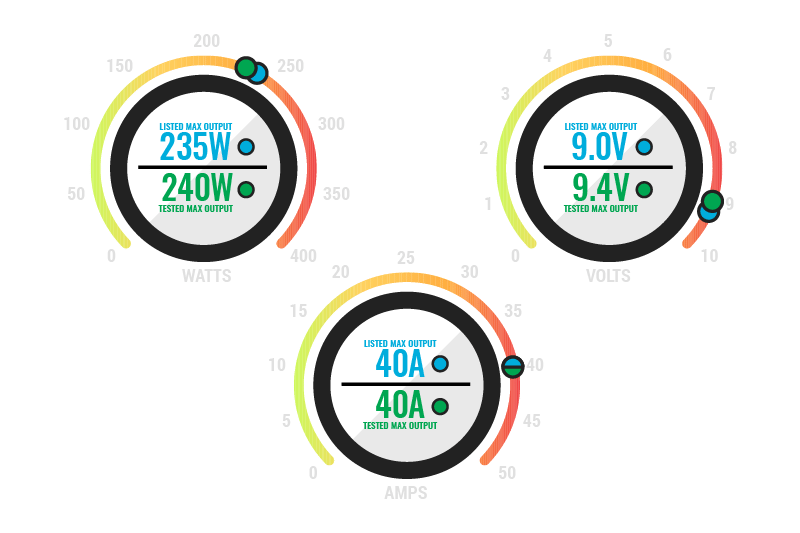 Testing on this mod was done with Sony VTC5A Batteries. They list the specs at 235 watts, 9 volts, and 40 amps so kudos on them for listing all three. During my testing, the max wattage achieved was 240 watts, so it’s accurately rated and capable of doing a little more than the 235 watts listed. 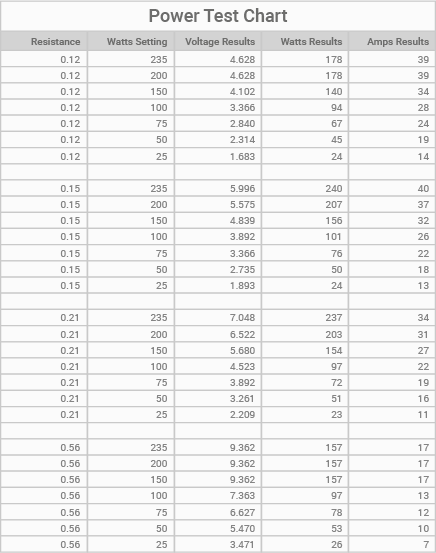 The mod round robins in 0.5 watt increments, which is nice. (I’m not sure why manufacturers still use 0.1 increments as a baseline.) It did get a little warm during stress testing at higher wattages (above 150 watts) but never too hot. During normal usage there were no heat issues.

It’s also a pretty accurate mod as well. It hit a little weak at the 0.12-ohm mark, like most mods do, but at 0.15 ohms and higher, it was usually within 1-3 watts. Overall it performs great and is accurately rated. See the full test results below:

When you put a new atomizer on it tells you to pick your mode and you can select SS316, but if you want to use TCR mode you need to go into the menu and manually select it. With that said, in “SS mode” the mod performed poorly. Whatever TCR they use for it is wrong, there was no dry hit protection. (This is something that should be corrected in an upcoming firmware update.)

In TCR mode I got great performance however. It’s pretty accurate. A warm vape will be in the 460-480ºF range and most people will find what they like between 400ºF to 500ºF. The throttle is nice and the dry hit protection at 500ºF and below works great too. Adjusting the wattage changes the ramp up time as well. It works the way it should and is a good performer if you use TCR mode. It’s a pass overall with the caveat of using it in TCR mode and not in SS316 mode.

Overall, The Innokin Proton mod is one of the best dual-18650 mods to hit the market in 2018. Their Aethon chip is very underrated, probably because the majority of Innokin’s previous mods used internal batteries, which are just not as popular. Innokin has a long history of making reliable good performing mods and this one lives up to that reputation. If you are in the market for a new mod, the Innokin Proton is worth a hard look for sure.

Buy Now
Check Out Our List of Best Box Mods

The post Innokin Proton Review | Test Results Are In appeared first on Vaping360.