Vaping YouTube has been rattled by recent actions taken against content creators. Longtime product reviewers like Ruby Roo, Tia Vapes, and Ryan Hall have received strikes, and no one is sure why.

The general belief is that YouTube is targeting JUUL content. The recent attacks on JUUL by politicians and anti-tobacco groups, and the company’s stated willingness to help eliminate youth JUUL use, are pointed to as driving factors behind the YouTube crackdown. Some vapers believe JUUL is working with YouTube to cleanse the site of juuling content.

But JUUL Labs says it’s not responsible. “We only request the removal of content that targets youth audiences or advocates for illegal activity,” a spokesperson told Vaping360 by email. So what explains the actions against YouTube veterans like Ruby Roo? Ruby has been on YouTube longer than JUUL has existed, and has more than 85,000 followers. She’s not a teenager, and she’s certainly not creating “youth-oriented” videos.

“YouTube is handing out strikes left and right for JUUL vape reviews,” she said last week on Instagram. “Today I had to delete 3 videos, one of which was my most viewed video ever. To see my hard work being thrown out makes me sick. Vape channels are being targeted by YouTube. All I want to do is help people not to smoke, and to put food on my table. Why does it have to be this way?”

“YouTube does not believe in the First Amendment,” said an Instagram meme showing Ruby and Nick “GrimmGreen” Green gagged with YouTube logos. “For the first time ever, I’m genuinely worried,” Green wrote on the post. “This isn’t an exaggeration.” 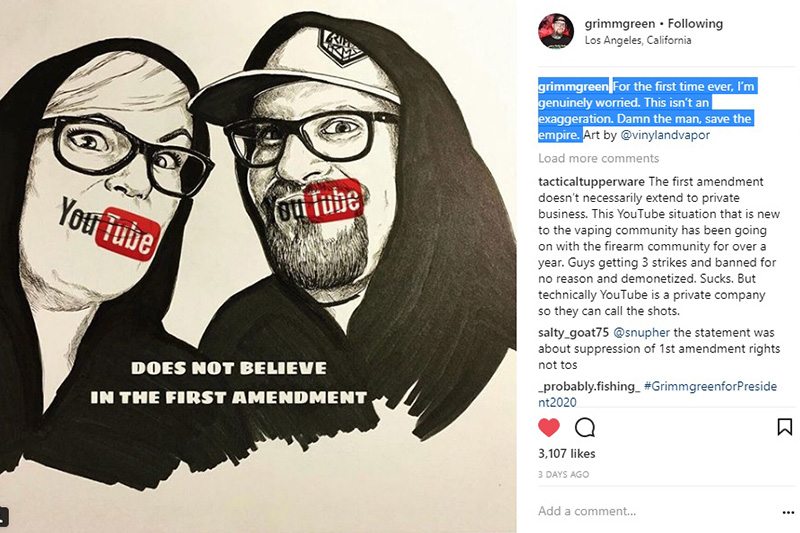 YouTube’s Community Guidelines describe content that is prohibited on the platform, but the guidelines are flexible enough to be applied to almost any video, and that leaves content producers guessing about what they can and can’t do on their channels. And YouTube doesn’t really explain its actions.

Anyone can report a video for some perceived violation of the guidelines, so tobacco control interns could be reporting every JUUL video on YouTube. But there are still a lot of actual youth JUUL videos untouched on the site, so that seems unlikely. YouTube looks at its own content too, with bots monitoring the site constantly looking for violations. When a video breaks the rules — or the AI thinks it does — the channel gets a strike. YouTube has a three strikes policy.

The first strike means some of the features the content creator uses, like the ability to livestream, may be disabled. The strike lasts for three months and then expires, unless the channel receives another strike during that time. There is an appeals process, but the appeal may be denied with no explanation, and if the appeal is denied the channel loses the right to appeal future strikes for 60 days.

The official URL's to my channels. YT is still priority for now, but I'd appreciate the follow on all three channels. You guys rock! #vape pic.twitter.com/YJ8QGAQxGQ

YouTube “demonetized” vaping content after the FDA’s 2016 Deeming Rule defined e-cigarettes as tobacco products. That means that channel owners have no opportunity to collect revenue from ads placed on their videos, which leaves them with affiliate links for products as their sole income source from videos. That’s one reason so many YouTubers have branched out into selling their own products.

Some vaping YouTubers are staking out a fallback position on other video hosting sites. Vimeo is the most popular, but also the least attractive financially. It offers no opportunity for advertising revenue, and actually charges the content creators for hosting their videos. Still, the site doesn’t attempt to censor vaping content. GrimmGreen and DJLsb Vapes, among others, have started Vimeo channels.

In our article on Abby Vapes last month, Abby described her migration to the gaming site Twitch. She still posts on YouTube too, but like other content creators, she’s worried. “I have seen a significant drop in viewership of my channel over the last six months,” Abby told us. “I believe YouTube has already taken some steps to ‘hide’ some of this content on their website.”

The term for this is “view suppression,” and the way it works is YouTube’s algorithms prevent a channel’s videos from appearing on the homepages of regular viewers of that channel. According to a Polygon article, YouTube also prevents the videos from appearing in the “recommended” tab on related videos the viewer may watch. It’s exactly what Abby described.

View suppression and demonetization are a double whammy for vaping content creators. Because being in a “mature” category like tobacco automatically restricts recommendations and advertising placement, vaping YouTubers are swimming against the stream. But YouTube’s secret rating system for videos doesn’t just punish supposed vices like vaping. According to the YouTube channel Nerd City (see video above), the social media behemoth is also suppressing content like suicide prevention, #metoo stories, and LGBTQ videos.

The fear of termination is being felt by content creators outside of vaping too. In recent months, YouTube has shut down many channels devoted to cannabis growing and use, including a wide range of content creators like Jorge Cervantes, Urbanremo, Silenced Hippie, and Custom Grow 420, a channel with 1.5 million followers. These channels seem to have been hit with all three strikes quickly and shut down with almost no notice. And, unfortunately, some serious drug harm reduction channels were also terminated during the purge. YouTube star Philip DeFranco has a good video explaining what happened with the “weedtubers.”

Wendy Vapes, a vaping reviewer, was apparently terminated from YouTube for a CBD video. YouTube’s bots may see CBD reviews as “drug content,” which means they’ll have to work overtime to “purify” the site. There are a lot of CBD-related videos on YouTube. Wendy Vapes has also started a channel on Vimeo. VapingWithTwisted420 is now VapingWithTwisted419 — “just to be safe,” he says.

Some of the actual marijuana channels have migrated to Vimeo too. Others have moved to a new venture called — naturally — The Weed Tube, a dedicated hosting site for cannabis content creators. “At The Weedtube, we want to ensure that cannabis creators are celebrated, not censored,” says the FAQ.

Some longtime British vapers have launched a similar video hosting site for vaping called Vape Tube (which may actually predate The Weed Tube). The site looks pretty good, though it doesn’t have a lot of channels yet. But DJSlb Vapes is posting there, and other channels are bound to follow if the site gains traction with vapers.

In fact, vapers should probably make a serious effort to get away from sites owned by the media mega-corporations that control so much of the internet. Google, which also owns YouTube, restricts advertising of vaping products on its search engine. And Facebook, which also owns Instagram, prevents vaping pages — even advocacy groups — from promoting posts or advertising. Facebook is under pressure to further restrict vaping content too, and there’s no particular reason to think they won’t.

The Google/YouTube press office didn’t return our requests for comment on this story. That’s not a surprise from the most opaque of the internet giants.

We may wake up one day to find all the vaping content on Facebook and YouTube gone. It would probably be smart to start moving away from these sites now. Besides, why do we want to be part of platforms that clearly don’t want us? Now’s the time to move back to the forums, to support the video content creators on Vape Tube and Vimeo, and to come up with new ways to communicate with each other.

When the story of vaping is written, YouTube will occupy a long chapter. Aside from ECF, YouTube has probably helped more smokers switch to e-cigarettes, and helped more vapers troubleshoot, compare, and choose gear and e-liquid than any other source of shared information. YouTube videos make up the biggest wing of the vaping library.

How many smokers found their first vape watching a PBusardo video? How many vape shop arguments have started over a RiP Trippers review? How many vaping advocates got mad and then got involved while watching GrimmGreen talk about the FDA? The history of vaping is in those videos. We can’t lose them.