Joyetech in entering the ring of coil-less atomizers with their new Riftcore Duo RTA. This is pretty far outside the norm for Joyetech. The atty is Joyetech’s first ever attempt on a rebuildable, aside from the various optional RBA decks for some of their stock coil tanks and the RDA/RTA decks that came with the ProCore Remix tank. Even calling this “rebuildable” is a stretch, though it is rewickable. 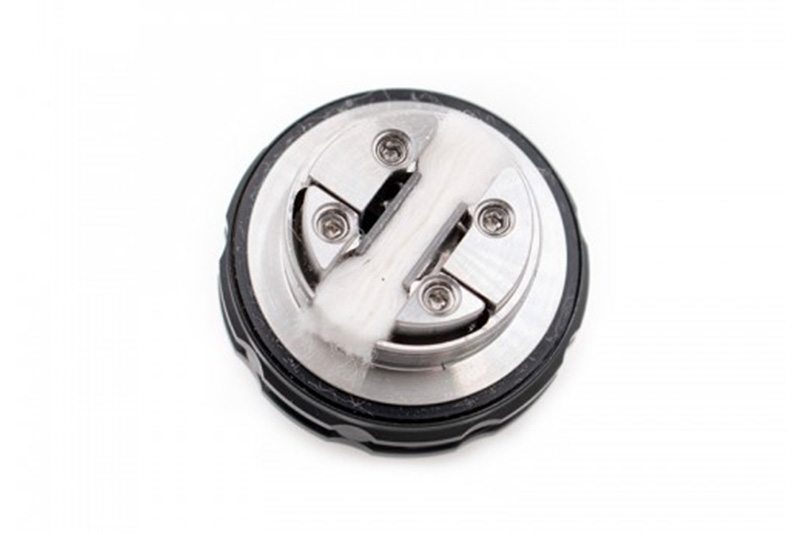 Will the RFC render coils obsolete?

Joyetech’s RFC feature two heating blocks — one on each side of the build deck — with the space between them used for cotton placement. There is no word yet on the specific material used, but Joyetech claims that the American-made (and tested) RFC heaters will last for a million puffs. Yes, you read that correctly! According to Joyetech, the heaters are also self-cleaning; you will just have to remove the cotton and fire them for up to 3 seconds.

This is not the first time we’ve seen vape companies launch a coil-less design. The original Ruyan e-cigarette patented by Hon Lik had an ultrasonic atomizer, but Ruyan quickly abandoned the design in favor of a wick and coil design.

The GUO Altus was the first recent atomizer to get rid of coils by adopting a CVU (Central Vaping Unit) core made out of a mix of tungsten and ceramic elements. Some of the original Altus’ design shortcomings were fixed on the Altus T1, but neither of them never really became popular due to performance issues and price.

It remains to be seen if the RFC will be the first coil-less atomizer to actually deliver on its promises.

Last year’s Nicotine Reinforcer NCR RDA was another unsuccessful attempt to ditch coils. This one seemed like a promising project at first, until word came out that the chipping aluminum nitride heating element could be a potential health hazard. Couple this with unreliable performance and it is no wonder the NCR ended up being a major letdown.

The latest contender is the USONICIG Rhythm, an innovative coil-less AIO kit that uses ultrasonic technology to vaporize e-liquid. Early reports described a vape that is a bit too cool and rather slow ramp-up time, but nobody denies there is some potential for this technology to develop into something worthwhile in the future.

Given Joyetech’s reputation, it is almost certain that this won’t be anything like the NCR fiasco. It remains to be seen if the RFC will be the first coil-less atomizer to actually deliver on its promises. What do you think? Will the Joyetech RFC manage to give traditional atomizers a run for their money? Let us know in the comment section.