With an election coming soon that will decide if San Francisco bans flavored tobacco products — including e-liquid — the proponents of Proposition E are pulling out all the stops in their efforts to win, including lying to the city’s voters.

San Francisco residents will decide on June 5 whether to uphold the flavor ban passed last year by the city’s Board of Supervisors. That’s because opponents of the ban collected enough signatures on petitions to challenge the law in a referendum. June 5 is the date of the city’s regular primary election, and several other ballot measures are also being decided, along with special elections to fill some vacancies, including mayor.

The ban’s primary target was menthol cigarettes, and that’s why Newport-maker RJ Reynolds invested millions to fight the ban by first financing the petition drive and then the No On Prop E campaign (formerly called Let’s Be Real San Francisco).

But the Board of Supervisors also included all flavored tobacco products, including small cigars, hookah tobacco (shisha), smokeless tobacco, and vapor products. (Remember, in California, e-liquid and all vapes are classified as tobacco products.) That got CASAA and California advocacy group Not Blowing Smoke involved, and industry groups like the American Vaping Association, VTA, and SFATA are also fighting Prop E.

The prohibitionists of the Yes on Prop E committee are instructing their canvassers to not use the word "BAN" to hide their prohibitionist tendencies. Shame on trying to mislead San Francisco voters! pic.twitter.com/xGqt9FZwSP

Local grocery and convenience stores oppose the ban too, because they count on cigarette and other tobacco sales. For many small stores, cigarettes and other tobacco products are the only reason customers visit. But the ban proponents — who are heavily influenced by the prohibitionist tobacco control culture that all but runs the California public health establishment — are ignoring the diverse opposition and aiming their campaign mostly at the Big Tobacco company’s involvement.

The No campaign is actually called SF Kids vs Big Tobacco. The language used in the No campaign is designed to invoke terror in voters — and to deceive. Volunteers for the No campaign have been instructed to avoid the word “ban” in phone calls and other interactions with voters, and instead to focus on — of course — “protecting the children.” E-liquid is referred to as “candy-flavored e-liquid,” or even “candy tobacco.”

And in one now-deleted post, the official Twitter account of the No campaign posted an image of an asthma inhaler with a brass atomizer and a DNA board photoshopped onto it. “Look closely,” said the tweet. “This is a vaporizer. Can you imagine reaching for it by mistake during an asthma attack?” Challenged by vapers on Twitter, the No employee first argued that the image was real, and then deleted the post. 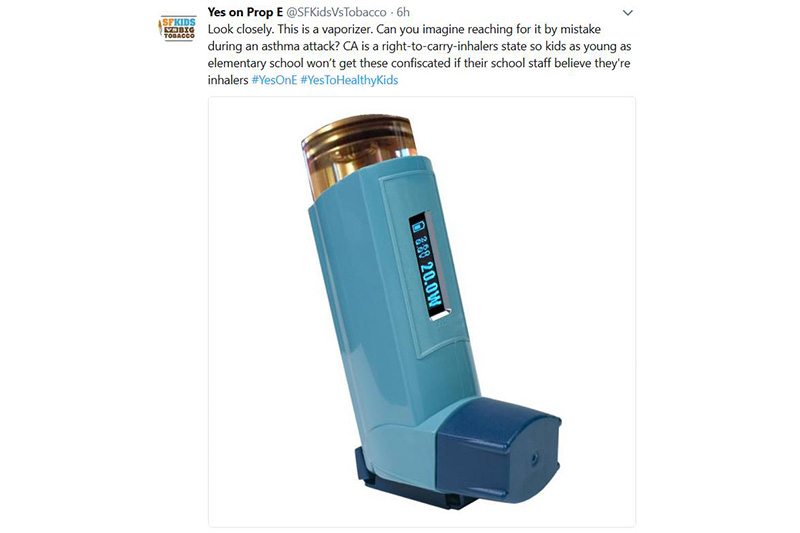 The Prop E campaign has taken some shots at JUUL too. The world’s largest vape manufacturer has its headquarters in San Francisco, and sales of JUUL products in the company’s hometown will be all but wiped out if the ballot measure passes. But beyond San Francisco, cities around the country will assess their own citizens’ willingness to allow prohibition of menthol cigarettes or vapor products partly based on the Prop E results. In other words, this might start a trend — and JUUL should be very worried, along with everyone in the vapor industry.

JUUL Labs didn’t answer our questions about whether the company was actively fighting the ballot measure, or supporting the No On Prop E effort. They responded to our inquiry with a statement: “JUUL exists to support adult smokers interested in making a switch. We believe flavors play an important role in adult smokers switching and staying switched, and we are undertaking research to better understand this important topic.”

For the small convenience stores, vape shops, and e-liquid manufacturers that depend on sales of the products their elected officials want to prohibit, there’s no time for more research, and no choice but to fight. No On Prop E is holding a rally on May 31 on the steps of City Hall. The rally begins at 10:30 a.m., and all opponents of Prop E are welcome.