Should Vapers Be Concerned About Vaping Diacetyl?

Home » Blog » Should Vapers Be Concerned About Vaping Diacetyl?

Diacetyl is among the favorite topics for authors looking to scare away potential vapers. But the risks of vaping e-liquids that contain diacetyl are hard to pin down. We don’t know for sure that vaping diacetyl is dangerous at all — but it must be taken seriously because the results of breathing the chemical in powder form can be horrific.

There is a lot written on all of the potential dangers of vaping. But they remain largely theoretical. There just haven’t been any proven negative health outcomes from vaping — aside from minor irritation caused by dehydration or sensitivity to propylene glycol. Is diacetyl really something for vapers to worry about, or is it like ultrafine particles, a non-issue cranked up by Stanton Glantz to frighten the public?

Diacetyl is a chemical used as a flavoring agent in many foods. It’s one of a class of chemicals called diketones that tend to impart a savory buttery taste, or enhance sweet flavors. Many commercially available food flavorings use diacetyl or other diketones, and those are the kinds of flavoring products used to create e-liquid. Diacetyl is also known as 2,3-butanedione.

The other popular diketone used in flavoring is acetyl propionyl (AP), also known as 2,3-pentanedione. While diacetyl gets more bad press, AP is likely just as risky to inhale. Neither diacetyl or AP seem to pose any danger when ingested. The FDA designates both chemicals “generally recognized as safe” (GRAS), meaning there have been no observed negative health outcomes from eating or drinking them. But inhaling them may be a different matter, as we shall see. 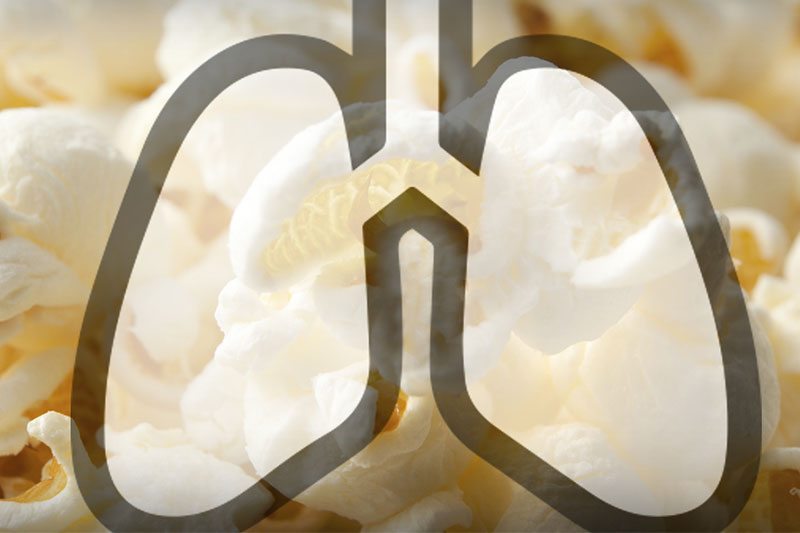 In 2002, the Centers for Disease Control and Prevention (CDC) documented eight cases of irreversible lung disease that occurred in workers at a Missouri popcorn factory during the previous decade. All eight workers had contracted a nightmarish condition known as Bronchiolitis obliterans, also referred to as obliterative bronchiolitis, or BO. It soon acquired another name: popcorn lung.

The workers had inhaled massive quantities of diacetyl that was applied to microwave popcorn. The chemical was used in powdered form to give the snack its trademark “movie theater popcorn” flavor. As the CDC discovered, inhaling diacetyl scars the smallest airways within the lungs (bronchioles) and reduce their capacity and efficiency. That’s the definition of BO. And there is no cure except a lung transplant.

In fact, cigarettes contain at least 100 times as much diacetyl as e-liquid.

After that initial episode, additional cases of BO were diagnosed at other factories, including some caused by other flavoring agents. Hundreds of lawsuits have since been filed by flavoring factory employees, and most have been settled. At least one consumer won a multi-million dollar suit claiming he had lung damage from making microwave popcorn in his home, although the science on that case is far from settled.

Does vaping cause popcorn lung?

Unfortunately, popcorn lung can’t be positively diagnosed without doing a surgical lung biopsy, and sometimes not even then. Reading the accounts of studies done at the flavoring factories where known cases have been isolated, it’s clear that there is a spectrum of lung damage probably caused by diacetyl and other flavoring chemicals. Not every affected employee had severe permanent lung obstruction.

And the symptoms of BO are easily confused with those of chronic obstructive pulmonary disease (COPD), a far more common condition. Many lifelong smokers have COPD, which is a combination of emphysema and chronic bronchitis (most sufferers have both diseases). However, COPD develops slowly over years, while BO can develop rapidly, often within months after the chemical exposure that causes it.

Popcorn lung remains one of the most popular anti-vaping media topics.

That doesn’t mean it’s impossible that vapers (or smokers) can’t get popcorn lung from inhaling diacetyl. But as far as we know now, it hasn’t happened. And that probably means it isn’t likely. But that doesn’t stop news outlets from jumping on the diacetyl vape issue. Popcorn lung remains one of the most popular anti-vaping media topics.

The question “Is vaping safe?” is probably best avoided. Frankly, it’s the wrong question. We assume when we make the calculation of e-cig safety that we’re addressing smokers, or people who would be smokers if they weren’t vaping. That means we compare the unknown and potential risks of using e-cigarettes to the absolutely known and proven risks of inhaling smoke from combusted plant matter.

Vaping may not be “safe.” But for smokers, or ex-smokers, or would-be-smokers, vaping is most certainly safer. Even including the possible risks of vaping diacetyl, vaping has huge advantages over smoking. Remember, cigarettes have at least 100 times as much diacetyl. If you’re still smoking, there is no evidence anywhere to indicate that you wouldn’t improve your health greatly by switching to vaping. Period.

The post Should Vapers Be Concerned About Vaping Diacetyl? appeared first on Vaping360.