After Public Health England (PHE) updated its review of the evidence on e-cigarettes and even recommended that the National Health Service (NHS) make them available on prescription, the backlash was really inevitable.

“Why is the NHS listening to the siren voices of the vape manufacturers?” asks Victoria Coren-Mitchell in the Guardian. “It’s appalling that a state-funded, state-sanctioned public health body should recommend vapes to people who want to stop smoking,” she complained.

But Coren-Mitchell claims that “the answer” — the answer! — to the problem of smoking is already well-known: Allen Carr’s Easyway to Stop Smoking. Why isn’t it being promoted by the NHS? she asks.

In today's Observer: I think there are better uses for NHS funds than giving them to British American Tobacco.https://t.co/P5cINqJvlA

While the author may have good intentions – she says she has no problem with smoking or vaping, if that’s what you want to do – she fundamentally misunderstands how to tackle the issue of smoking in society, and why the PHE recommendation was made in the first place.

The short version is that there is no magic bullet that can solve the problem. Any purported “easy way” doesn’t work for everybody, be it vaping or the words of a “visionary” like Allen Carr.

Should we pay for prescription e-cigarettes?

The source of the anger driving the article is really quite understandable. Coren-Mitchell isn’t alone in taking issue with e-cigarettes being made available on prescription. Many vapers aren’t exactly fans of the idea either.

While her complaint is that the costs for prescription vapes will go to a cigarette company like British American Tobacco, vapers often object to the idea of vaping itself becoming sanitized and medicalized rather than being left as a consumer-driven, free market solution to the problem. The value of vaping, it is argued, is that smokers don’t have to go to the medical establishment to get a “cure” for their problem. It’s a pro-active choice that feels good to make, coupled with the convivial environment of vape stores and a thriving community rather than sterile medical offices. 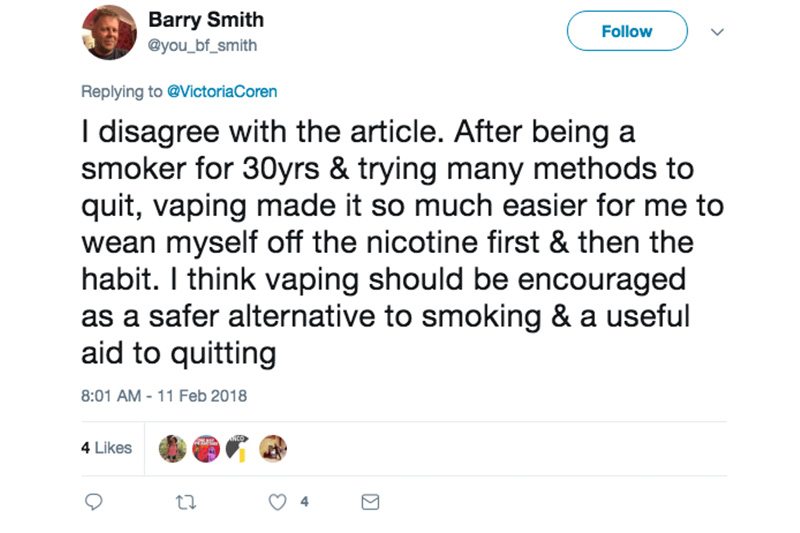 The strongest argument against the idea of publicly funding vapes as cessation products, though, is that vaping is actually cheaper than smoking anyway. Why should the NHS have to make the cost-saving even bigger at the expense of the taxpayer? Isn’t the fact you’ll already be saving money enough?

On the other hand, smokers may see the up-front cost of a starter kit as taking a risk on something they’re not sure they’ll like. Also, some people might want the added reassurance of a recommendation from a health professional. And ultimately, if it does help them to quit smoking, it will still be a good thing for public health overall.

There are middle-ground solutions – like a voucher system for the initial cost but no financial support afterwards – but the key point is that this is a legitimate point of contention. I largely agree that the NHS shouldn’t be prescribing e-cigarettes, but there are also good reasons to consider the other point of view.

The key issue with the article is the framing of Allen Carr’s approach as “the” approach to quit smoking. “There is a way to stop smoking and [vaping] isn’t it,” Coren-Mitchell writes. “The whole approach is stupid, unhelpful and wrong.”

Because the abstinence-based Allen Carr approach revolves around affirming that you don’t actually need nicotine at all and empowering you to realize there is no reason to use it, e-cigarettes are pitched as a natural enemy. But the reality isn’t as neat and tidy as that. 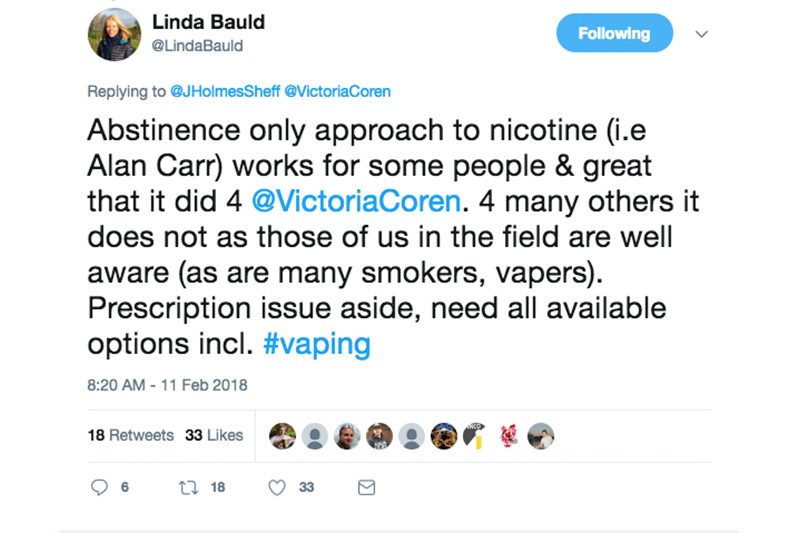 In ideal scenarios (with a group of smokers committed to quitting that choose the intervention, in a study with no comparison group), long-term quit rates are about 51 percent. There is a randomized controlled trial in the works but very little in the way of reliable evidence on Allen Carr so far. And this is for the course rather than the book, which is a lot like a series of group counseling sessions, where social support has a big role to play too. Quit rates using purely self-help materials in print form (although not Carr’s book specifically) are less impressive.

Still, there’s nothing wrong with this. If more reliable research supports its effectiveness, then the courses in particular will be great for those who are interested and who it works for. But it leaves a big, unanswered question: what about everybody else? 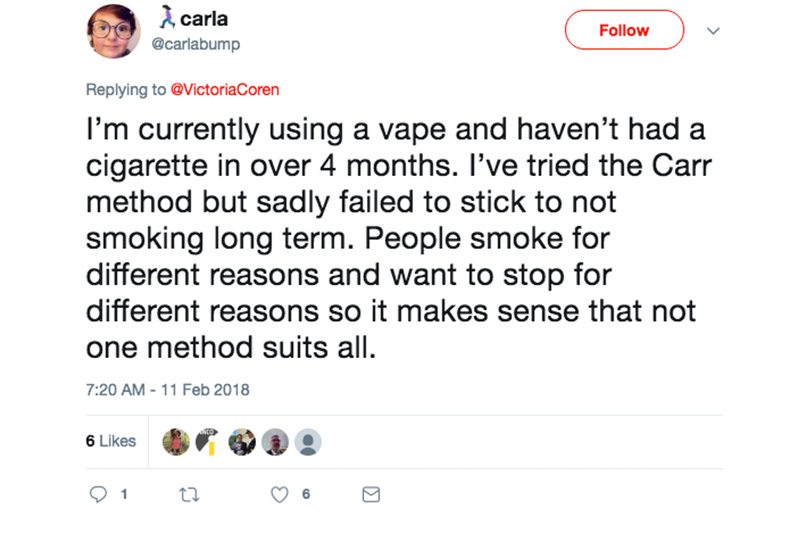 In the same way, it’s fantastic that Coren-Mitchell and many others were able to quit smoking using Allen Carr’s approach. If you have the willpower and ability to get through it, you should absolutely be proud of yourself. But just as I wouldn’t tell every smoker I know to try vaping if they didn’t want to, Allen Carr isn’t a one-size fits all solution either. It’s one of many possible tools people can use to quit, and throwing the rest of them out makes no sense whatsoever.

To help as many people quit as possible, we need to make use of everything at our disposal, not ascribe to some “my way or the highway” philosophy that denigrates anything but complete abstinence. Nicotine shouldn’t be the enemy, the health risks of smoking should be.

What’s really behind the U.K.’s support for vaping?

Although the other parts of the article can be sympathized with to some extent, the notion that PHE is just listening to the “siren voices” of vape manufacturers is laughable. The PHE report wasn’t the result of consultation with the industry; it was based on consultation with the available scientific evidence. The report is over 200 pages long and is forensic in its detail.

The evidence strongly suggests that vaping is much safer than smoking. After reviewing the evidence, the PHE authors wrote, “Based on current knowledge, stating that vaping is at least 95% less harmful than smoking remains a good way to communicate the large difference in relative risk unambiguously so that more smokers are encouraged to make the switch from smoking to vaping. It should be noted that this does not mean e-cigarettes are safe.”

Also a long way from understanding who/what the vape industry in the UK – or indeed anywhere – is! https://t.co/LZQWM0692E

For the issue of how effective vapes are for quitting smoking, PHE again conducted a reasonable review of the evidence. More data is needed to really be firm on this – and the authors note that meta-analyses of the evidence so far have produced varying results – but they conclude that “E-cigarette use, alone or in combination with licensed medication and behavioural support from a Stop Smoking Service, appear to be helpful in the short term.”

They also point out that estimates suggest that vaping has led to 22,000 new quitters — people who wouldn’t have quit otherwise — each year in the U.K., and possibly as many as 57,000. The figures have to be interpreted cautiously, but the idea that they’re proving to be a valuable tool for some smokers has strong support.

Had the vaping industry’s “siren song” been responsible for these recommendations, you can safely say they’d be a little more robust and strongly positive. PHE hasn’t been enraptured by unsupported claims from the mythical “Big Vapor.” Rather, it has taken an objective look at the evidence and made some pragmatic recommendations. 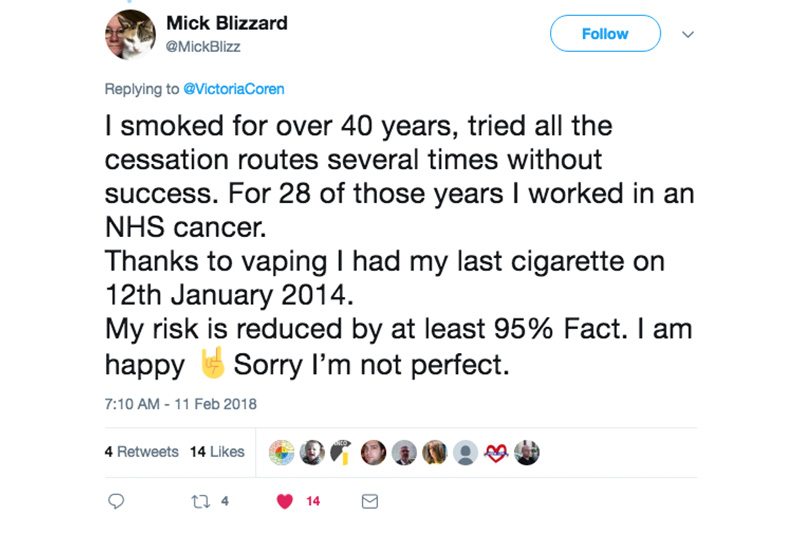 The number of smokers who don’t know that vaping is safer than smoking is appallingly high, and the “at least 95 percent safer” figure conveys the point well. E-cigarettes are by far the most popular quitting aid used in the U.K., and the evidence – while limited – suggests that they work, so PHE is encouraging their use.

There is no conspiracy to keep people addicted to nicotine; the recommendations for e-cigarettes and other quitting methods exist to help as many people as possible.

Quitting smokes should be celebrated

Despite Victoria Coren Mitchell claiming to have no problem with vaping, the holier-than-thou tone of the article and dismissive, vaguely conspiratorial and ill-researched response to a detailed review of the evidence on an important topic makes it clear that she hasn’t really made an effort to understand why it has helped so many people.