Not long ago, VandyVape released the Berserker MTL RTA in cooperation with Alex from VaperMD. Now, VandyVape has created a mini version of the same design. Aside from being TPD-compliant, it comes in handy for anyone who likes the original Berserker but prefers a smaller setup. It gives you a nice-looking small RTA that can fit on smaller box mods — like the popular Eleaf Pico — to create a a more compact MTL-setup.

Since I usually use smaller setups or pod mods, this little Berserker looked perfect to me. A lot of companies are starting to care again about MTL vapers, and I appreciate that. Will the Berserker Mini conquer the market and leave all its competitors in the dust? Let’s dive into it! 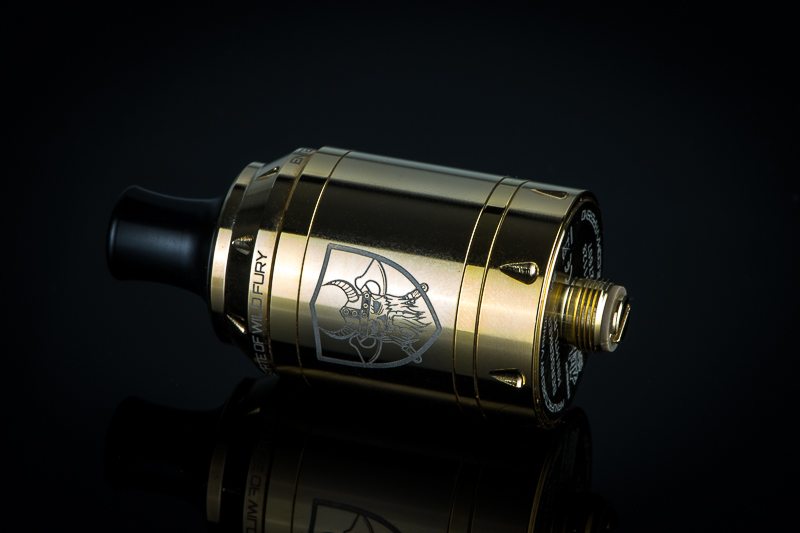 We received the gold version of the Berserker Mini RTA, and it looks gorgeous. It’s all gold, aside from the drip tip (which is ultem, so it looks matchy matchy). The laser-etched Vandy Vape logo comes from a Japanese manga called Berserk. I’m guessing that either someone at Vandy Vape or Alex must be a big fan.

The RTA comes with the metal tank section pre-installed. I had to switch that out immediately. Don’t get me wrong, the metal tube looks super awesome, but in my opinion it doesn’t make sense for a small tank since there is no window to monitor e-liquid levels. Luckily, the tank also comes with both Ultem and clear glass tanks.

While disassembling the tank, I checked the quality of the threading and o-rings. The tank is very well machined. I couldn’t find any sharp edges, burrs, or other manufacturing mishaps. And the threads are smooth. But the top cap’s O-ring isn’t the best – mine got a little frayed when screwing and unscrewing the top cap.

The tank’s chimney has the dome – conical — shape that is now popular on the new wave of MTL atomizer because it is believed to provide better flavor and smoother airflow (and idea that began years ago with RDAs like the old Magma RDA from Paradigm Mods).

On the top cap you have the same laser-engraved text as on the original Berserker that says: “Enter a state of wild fury.” It also has drop-shaped indentations which make it easier to unscrew by providing something to hold onto — but it’s still not ideal, especially if you have large hands. 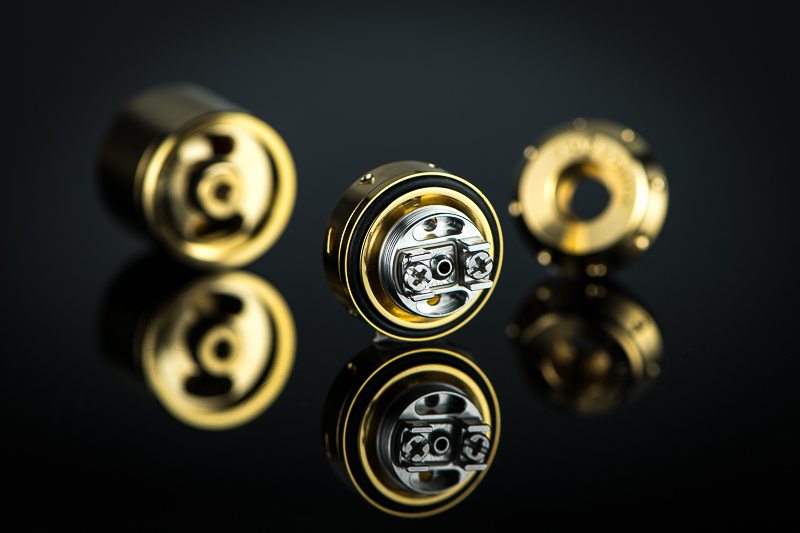 The Berserker Mini RTA utilizes a two-post deck that’s very similar to the Svoemesto Kayfun build deck. It’s meant to be used with single coils only. The design of the posts gives you the freedom to coil your wire in either direction, but I recommend building to the right (I’ll explain in a bit). The beefy, top-mounted Phillips screws provide space for your coil legs on both sides. The airflow hole is slightly elevated which requires the coil to be installed with the legs underneath the wraps. You’ll want about 1 – 1.5 mm of space between coil and airflow.

The wicking slots are on the deck, unlike other recent MTL RTA’s like the Innokin Ares, or Digiflavor Siren 2. I’d compare it to the wicking slots from the Augvape Merlin Mini, with the difference that the e-liquid will come through a little hole underneath the cotton, not from the side. This is a nice design touch. When you wick a GTA-style RTA like the Ares, your cotton can get trapped in the threading. This won’t happen with the Berserker Mini. 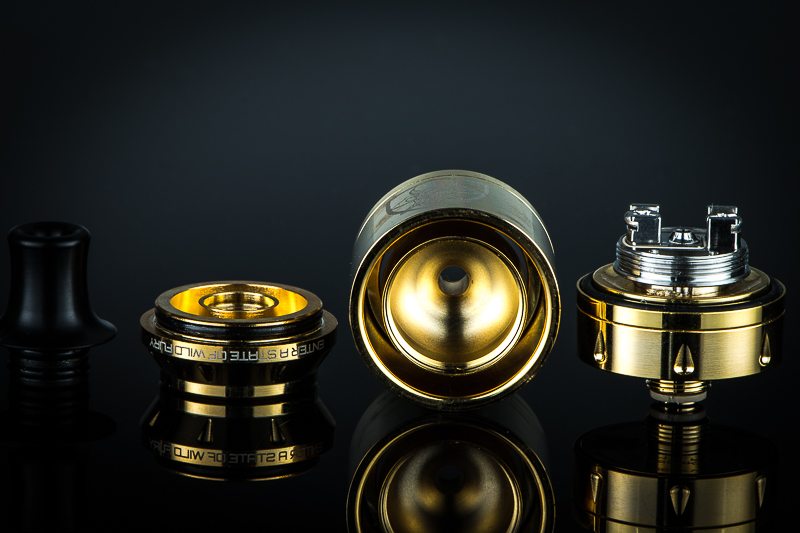 One side of the adjustable air slot is more tapered than the other, giving you a bit more versatility, although it doesn’t make a big difference. The AFC ring is not too tight, but definitely tight enough; it won’t adjust itself by accident.

The airflow to the coil comes from directly under the coil through the little hole I already mentioned. It provides an authentic MTL draw, even on the widest setting — unlike the Digiflavor Siren 2 and Innokin Ares. 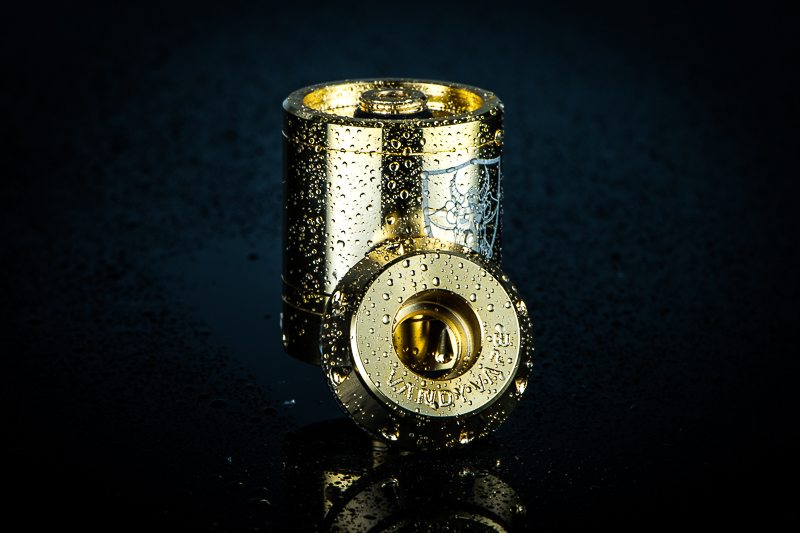 The first build I used on the Berserker Mini was with one of the Clapton coils provided in the package. The installation wasn’t as easy as I hoped. And now we come back to why I recommend wrapping the coils with the legs on the right side: while tightening the screws, they push away the leads from the coil and deform the two outer wraps. This doesn’t happen with plain round wire, just Claptons. So if you choose to use complicated wraps, make sure the legs are on the right side. Mike Vapes illustrates that in his video.

My build came out to 0.8 ohms. Wicking the coil isn’t particularly easy because you need to cut the cotton quite short. I tucked the cotton gently into the wicking slots, then as soon as I felt a little resistance I stopped and cut of the rest of the cotton that didn’t go in easily. Then I juiced up the wicks and screwed the tank on.

After filling the tank, I set my mod to 18 watts and started vaping, using the tightest airflow hole fully exposed. The draw was very tight and warm, but too tight for me. I tried all the airholes and concluded that the widest one works the best with the Clapton coil at 18-20 watts. The flavor is insane. My 25 mg salt-based mango e-juice never tasted better! The draw is still tight enough for a good MTL hit and feels very smooth. I usually don’t use Claptons in MTL setups, but maybe I should do this more often.

My next two builds were 1.0 ohm and 1.56 ohms with normal round 26-gauge Kanthal. I used the same wicking as before and adjusted the wattage till I found my sweet spot. The flavor was still outstanding. I haven’t had any wicking issues so far, and I’ve been chain vaping it. I’ve probably refilled the tank about three times a day since I began using it. Considering it has a 2 mL capacity and I’m pretty much chain vaping it, that’s pretty reasonable juice economy.

As stated, the O-ring on the top cap seems to wear out quickly. I hoped this wouldn’t be an ongoing issue, but it seems to be just that. There was also a little piece of rubber floating around my tank — not really something I wanted to see, but not the end of the world either.

I didn’t have any leaking or wicking problems throughout the whole testing period, not even after filling the tank with the airflow open.

After vaping on this beautiful tank for a while, I can highly recommend it to any MTL vaper who can has the slightest building skills. I can’t really find anything that speaks against buying the Vandy Vape Berserker Mini. It’s almost perfect! Frankly, I think it’s a top-contender for the best mouth-to-lung RTA currently on the market. If you’ve tried the Berseker Mini, I’d love to know if you feel the same. Sound off in the comments section.