But Yellow Brand Protection was hired to go after sellers of clones of VGOD mods, not e-liquid recipes. The company targeted the E-Liquid Recipes website because its automated searches saw the phrase “VGOD clone” (or variations of it) on the site. Some of the mentions of VGOD on the e-liquid site weren’t about clones at all. Two, in fact, were vendors selling authentic VGOD e-liquid.

Vapers who DIY are among the community’s most committed and best organized.

Early this morning, VGOD responded to our request for comment with a statement explaining that the company was using Yellow Brand Protection to search for sellers of cloned VGOD mods, not e-liquid recipes, and that the letter to the DIY site was a mistake that VGOD hadn’t authorized. The VGOD response was published this morning on the site’s DIY forum.

“We have spoken to Yellow Brand Protection and have requested they take no further action towards your site or any DIY related eliquid websites as there is no intent to sell clone products,” says the response to the E-Liquid Recipes site. “If you receive any future correspondence regarding any legal action on behalf of VGOD, please reach out to us directly and we will work with you to resolve the matter.

“We have made every effort to cultivate the VGOD brand as one that offers quality hardware and premium eliquid to the vaping community around the world. We appreciate the DIY community and its positive contributions to increase the available options for vapers as we share a common goal of a smoke free society.”

Many posts on E-Liquid Recipes — and on all DIY sites and forums — involve home e-liquid makers attempting to copy (clone) popular commercial flavors. Many DIY mixers also buy commercial e-liquid, because they enjoy it but also to taste test for possible ideas.

Vapers who DIY are among the community’s most committed and best organized. Many see themselves as the vanguard of a resistance to oppressive FDA regulations, including the coming war on e-liquid flavors. The E-Liquid Recipes site includes an active forum for DIY mixers.

The original letter from Yellow Brand Protection (see it above) became public when Lars (known as daath on the site), the creator of E-Liquid Recipes, started a thread on the site’s DIY forum that included an image of the C&D letter. A long discussion ensued. The thread now has more than 130 comments.

As word of the threatening letter spread throughout the DIY community, posters began uploading fake recipes that were really sarcastic jabs at VGOD, including one that included ingredients like “Cloud Bros, Instagram Likes, Marketing, and Sucralose.” 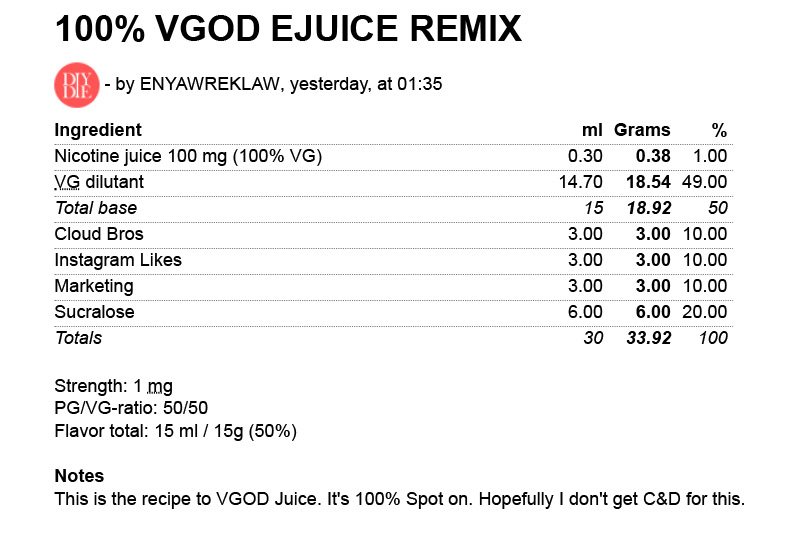 VGOD is known for its team of vape trickers, and its mech mods made for cloud blowing and tricks. The Los Angeles-area company calls itself “the most recognized Vape Lifestyle brand around the globe.”

The company apparently was forced to take down its Facebook ratings after many angry DIYers posted one-star reviews. The comments on recent VGOD posts on Facebook have also been taken over by sarcastic and antagonistic remarks.

(This article is based on original reporting by Spyros Papamichail).