The CB-80 is the latest mod from longtime popular manufacturer Wismec. CB stands for “Check Bunny” and is designed by Jake Barney, an industrial designer in California — and not by Jaybo or Sinuous like previous Wismec mods. It’s a tiny, single-18650 battery mod that can handle 22 mm atomizers without overhang. Listed at 80 watts, it’s meant to be small and portable.

Wismec mods haven’t had the best track record in my reviews so let’s see if this one can change that, or if it misses the mark like many of their past ones. 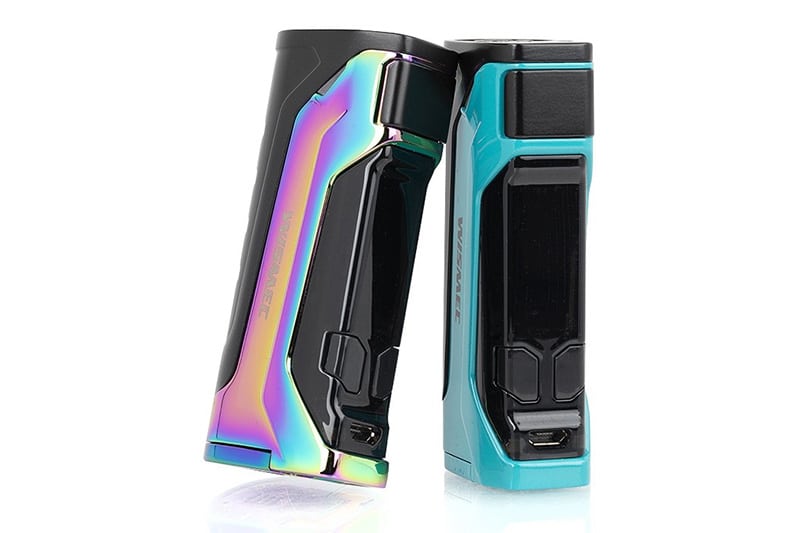 When I first got this mod, I was impressed with how small it is. It has a tall and skinny design and not the short and wide design of the Eleaf Pico line. It’s actually one of the smallest mods I’ve seen.

I understand that many will want newer mods to be compatible with larger batteries, but this was designed to be small, so taking only 18650s makes sense. I liked the size and shape of it, but let’s see about the rest. 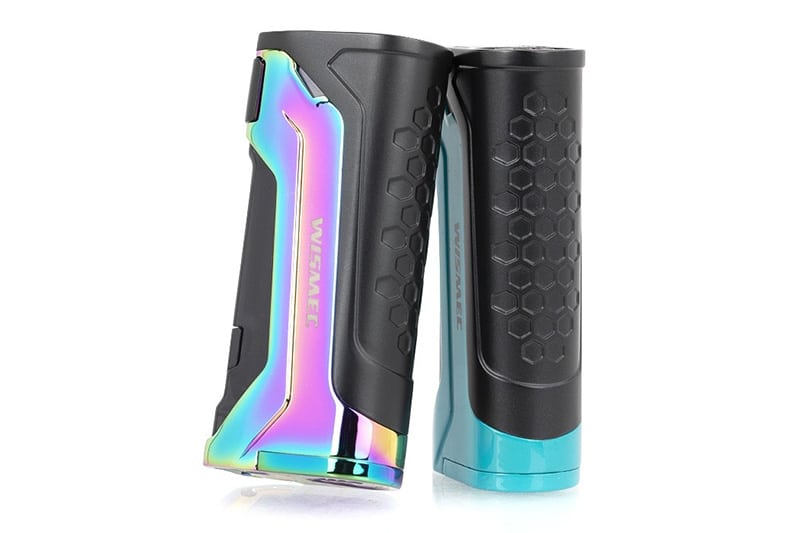 The Wismec CB-80 has a small, front facing DNA-style screen. The layout feels a little outdated these days, but it’s pretty bright and easy to read. A large fire button is placed above and the plus and minus buttons are placed under the screen. The size and placement of the fire button reminds me of the Jaybo designed Wismec mods and the Espion solo from Joyetech. There is no rattle, and it feels pretty solid for the type of device it is. The paint job is a pretty standard one, nothing special but should hold up decently with use.

On the sides, there is “WISMEC” branding, as well as two little LEDs that turn on when you fire. You can’t program them to do anything fancy or turn them off. The top has a faint CB-80 logo on it that blends in with the body color and doesn’t stand out like the Wismec branding. The back has a honeycomb grippy texture that feels nice. It’s made to handle 22 mm atomizers only, so anything bigger will overhang. 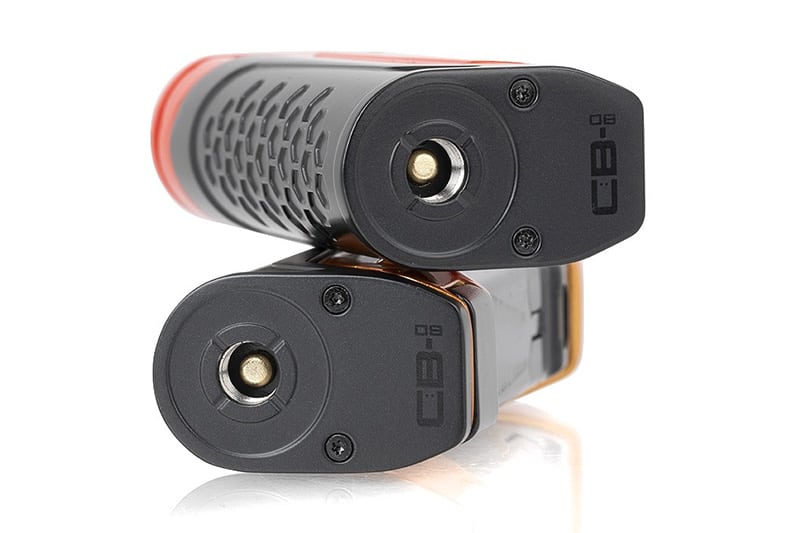 The CB-80 has all the features you’d expect from a Wismec mod. It has power mode, bypass, temp control for NI200, SS, and Ti wire as well as three TCR memory modes. This one doesn’t feature a pre-heat function, which is odd. Most Wismec mods have the power and duration options for a pre-heat. It is listed with a 2-amp charging, but I wouldn’t charge internally on this mod. It gets way too hot. 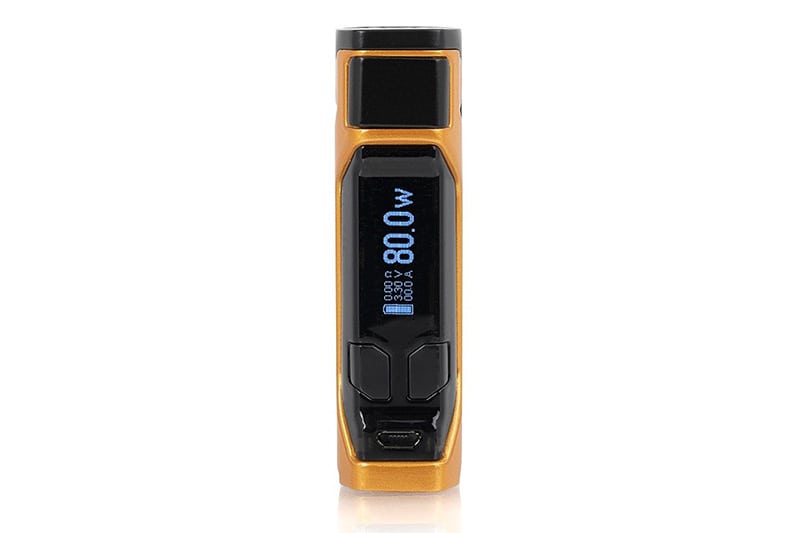 Using the mod is pretty simple. They went with an easier more standard menu this time around, albeit with a little less functionality than before.  It’s five clicks to turn on or off. Three clicks to enter the menu where you can scroll between the modes and use fire to accept. 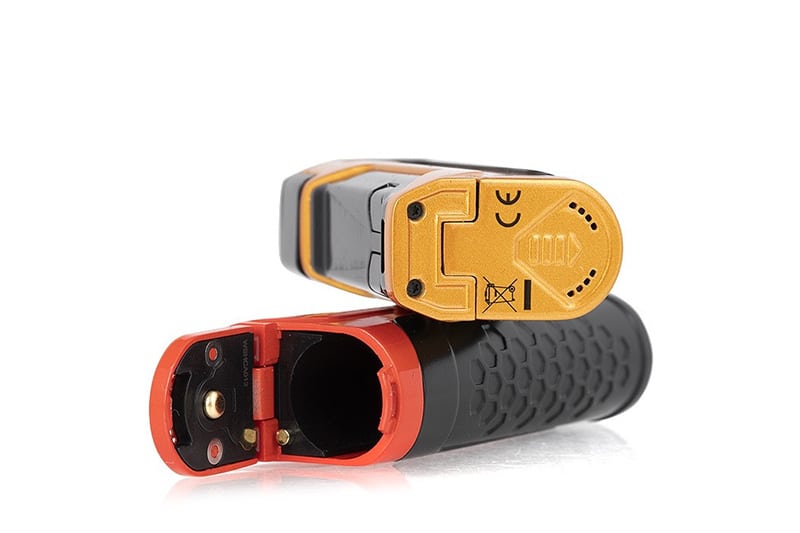 Testing on this mod was done with Sony VTC5A Batteries. They list the specs at 80 watts, 9 volts, and 50 amps. Kudos on them for listing all three. During my testing the max achieved wattage was 84, So it is accurately rated and capable of doing a little more than the 80 listed.

The amp limit I got was 25 amps which is a little low for a single-battery mod and falls way short of their listed specs. The 50 amps listed limit is a joke. Based on the watt limit of the device, you would need to use a 0.03-ohm coil which is below the mod’s limits anyway. In any case, the CB-80 is vastly overrated in this department.

The voltage limit I got with a 0.61-ohm coil was 7.153 volts. I couldn’t go higher due to the wattage limitations of the device. Pretty high for a single battery mod and confirms it has a boost circuit as well. I’d consider the 9 volts to be plausible but would have had to test with a 1.0-ohm or higher coil. Regardless, more than enough voltage for anyone’s needs.

The mod adjusts in 0.1-watt increments. During my testing, the mod gets really hot when firing at 50 or more watts. It’s also inconsistent enough that I can’t place a set value on it. It just doesn’t work well, even though it mostly meets it specs at times. If you are only going to vape at 40 watts or less, it’s serviceable. Overall, not very happy with the CB-80’s performance in power mode.

Note: Due to the inconsistency issues described above, I wasn’t able to generate an accurate power test chart for the CB-80.

The mod was terrible in temp control — it wouldn’t even work. While the old Wismec mods would kick you out of temp control, this does something different. It just displays an “atomizer short” error and won’t fire, despite there being no short whatsoever. It did that on every build, even the simple round ones. All the builds worked fine on other mods. It wasn’t the builds, it was the mod.

Even if you switch back to power, it won’t fire. You need to remove the tank, fire it without an atomizer a few times to clear it, and then put it back on. Then it’ll fire again — until it decides it doesn’t want to anymore. While I didn’t disassemble it, my testing results and TC usage point toward a grounding issue in the mod itself. This has been a common occurrence with Wismec mods and needs to be fixed ASAP.

I do not recommend this mod. The issues with the performance of the Wismec mods need to be addressed. I’ve spoken with them before, and they said they would relay it back to the engineers but nothing seems to change. I’ll talk to them again, but at this point, I doubt anything will happen — and I doubt I’ll be getting sent their products for review much longer. There really aren’t any redeeming qualities for this mod.

How was your experience with Wismec products so far? Let us know in the comments below.